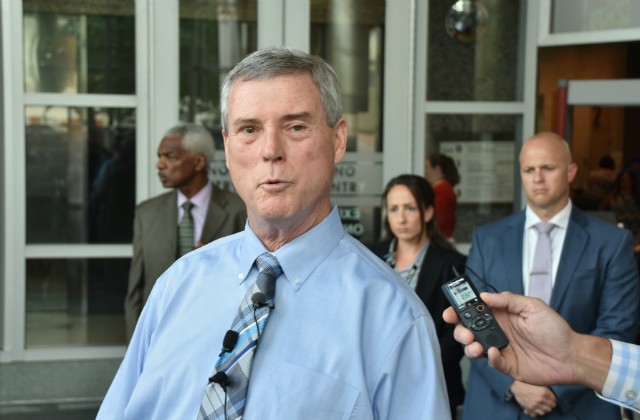 Former St. Louis County Prosecuting Attorney Bob McCulloch lost the election to keep his job, but he was the unanimous choice of an Irish organization to lead the St. Patrick's Day Parade this year in Dogtown.

McCulloch is to be honored as the grand marshal during the March 17 event.

That is a problem for critics of the controversial former prosecutor, who are asking the organizers to rethink their decision.

"McCulloch's stance on police brutality and low-income housing policy is one that does not agree with the community of the 24th Ward," state Representative Wiley Price, whose district includes Dogtown, wrote in a letter to the Ancient Order of Hibernians, the Irish organization that puts on the parade.

The neighborhood's alderman, Scott Ogilvie, also penned a letter and posted it on Twitter, saying he worried McCulloch's presence could have a divisive, potentially violent effect on rowdy crowds.

"In the congested environment along the parade, it does not take all that much to induce a conflict between people," writes Ogilvie, adding that he has twice been assaulted by revelers who pack the neighborhood. "I have a real fear that someone will be hurt who is attending the parade as a result of the inflamed passions and partisan feelings Mr. McCulloch creates."

In 10 days the Dogtown neighborhood welcomes the St. Patrick's Day parade back for a 34th year. My request for former prosecutor Bob McCulloch to decline the invitation to the lead the parade. Please read. Thanks: pic.twitter.com/dgM4h3wxYx


Jim Mohan, who helps organize the parade for the Hibernians, says the organization selected McCulloch over other nominees solely for his support of its work over the past three decades, not his work as a prosecutor.

"Point blank, this was not a political statement by the Hibernians," Mohan says in a phone interview.

He says McCulloch has helped out in the past with a number of the Irish organization's projects, particularly the Judge James Daily Wahl Memorial Hoses, Handcuffs and Hard Hats dinner. The annual event was first created to honor New York City police officers and firefighters after the September 11 attacks. It typically recognizes local emergency responders among others while raising money for charitable causes.

This year's event happened Thursday night. McCulloch was on the list — along with St. Louis police Lt. Col. Lawrence O'Toole — to be honored but he was out of town, Mohan says.

Mohan adds that McCulloch has marched for years at the front of the parade without incident, and the Hibernians have no intention of rescinding their invitation.

In a letter, the 24th Ward Progressive Democrats blasted McCulloch's record, zeroing in on high cash bail requests and his handling of the grand jury investigation into Michael Brown's killing in 2014 in Ferguson. He so infuriated activists that they organized powerful opposition to his campaign for re-election last year. Political newcomer Wesley Bell, running on a reform platform, trounced the 27-year incumbent.

The 24 Ward Progressive Democrats also pointed out that one of the last times McCulloch popped up as an honored guest at a public event it did not go well. In August at the Oregon District Attorney's summer conference, his comments about Ferguson and the ACLU so enraged prosecutors in the audience that many walked out and later boycotted his keynote address.

"The decision of the [Hibernians] to honor Mr. McCulloch as Grand Marshal in 2019 is tone deaf to the concerns of the broader community and to the will of the voters and the mandate they gave Mr. McCulloch's replacement," the 24th Ward Progressive Democrats wrote.

Mohan says parade organizers are concerned by suggestions there could be trouble at the parade, but there are no plans for added security beyond their typical plans.

"If someone wants to protest, that's their constitutional right," he says. "We just hope no one does anything over the top."

The parade kicks off at 11 a.m., followed by an Irish festival.