Lynnette Miller wasn’t a doctor or firefighter, just someone living in New York who wanted to contribute in the wake of 9/11, whether that meant handing out dry socks or supplying hot coffee to other first responders. But just one month after starting to help out at Ground Zero, Miller made a trip to the doctor — she was already facing health-related complications. Volunteering four days a week without a mask after two giant skyscrapers fall can do that.

Eighteen years later, Miller, who nows lives in St. Louis, is still suffering from multiple 9/11-related health problems. And that’s why Miller will be in Washington D.C., today, lobbying for 9/11 first responders in need of financial compensation due to health problems.

In December 2015, Congress passed a bill that supported those still experiencing health problems from 9/11. Although the bill guaranteed first responders health care for the next 75 years, it only permitted monetary compensation until 2020. This is a major concern for Miller and other members of the FealGood Foundation, an organization that supports former 9/11 responders, who are fighting for a long-term compensation bill. Distributed in the form of lump sum payment, the compensation helps first responders with lost wages and lost quality of life following 9/11, similar to that of a disability check.

First responders who were awarded compensation before 2020 are set, but if the compensation period is not extended, those who apply after 2020 may not receive the extra support. Miller says she already suffers from medical conditions such as obstructive airway disease, rotator cuff syndrome, and PTSD. She also worries about contracting cancer in the future like so many other first responders and, she says, “being a burden on my family.”

The prospect of cancer has become a stark reality for not only first responders, but people who lived in New York at the time. Just last August, the World Trade Center Health Program reported that almost 10,000 people had been diagnosed with cancer as a result of 9/11.

Congress has already started to cut back on compensation provided to first responders. In mid-February, the Victims Compensation Fund announced it would cut 50 percent of the needed compensation for those with pending cases. Then it was determined that anyone who requested compensation after February 2, 2019, would lose 70 percent of what they’d been found to need.

Miller insists that these first responders need the money. It’s not about taking advantage of the government or trying to exploit the events of 9/11, she says.

“No one is getting rich off of this this,” Miller states. “It’s allowing people to survive, pay their mortgage, and give them some stability, afford car payment.” 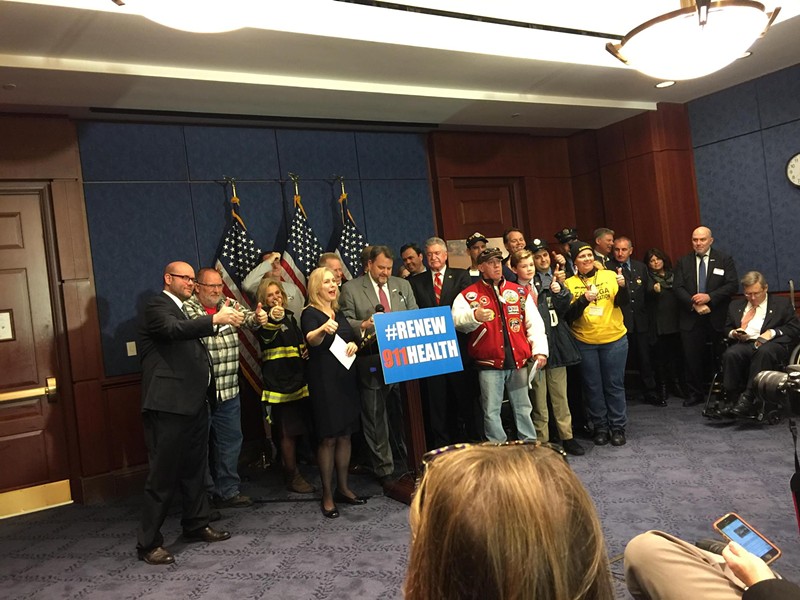 Miller notes that politicians across the aisle want to support first responders, but some have used the bill as “leverage.” She cites Senate Majority Leader Mitch McConnell as someone who has dangled the current bill as a way to pass an oil-related bill. (McConnell has denied this.)

“I’m so tired of politicians with their tweets and their posts and their flag pins and their patriotism but they don’t support first responders,” she says.

The push for first-responder compensation is a frequent topic in the tri-state area of New York, Connecticut and New Jersey, but Miller wants Missouri citizens aware of the issues at hand. Although the attack happened nearly 1,000 miles away, Missourians were still affected. She notes that the state sent responders to assist in 9/11 relief and that roughly 89 people in the state are receiving the government-sanctioned health care benefits.

Many first responders are too sick to make their way to Washington and that’s why Miller is going. Along with 35 others, Miller hopes to play a small role, but their lobbying needs as much public support at they can get. Although they’ve had the help of comedian Jon Stewart, Miller emphasizes that this is a “grassroots” effort. “No one is supporting this with big money,” she says.

Senator Kirsten Gillibrand (D-New York) will introduce a reauthorization of the bill allowing long-term compensation this afternoon. Miller wants the public, especially Missouri residents, to hold their politicians accountable by seeing which ones support the bill. You can check out more info online.