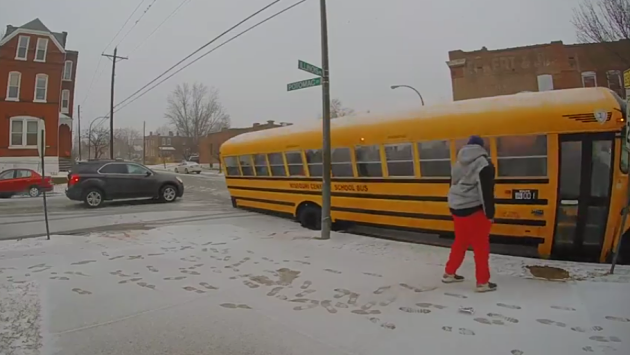 The city of St. Louis was founded in February 1764 by a group of French settlers. Within months, a fur trader by named Pierre Laclede arrived with a detailed plan for the settlement, including a street grid. For his efforts, Laclede Avenue and Laclede's Landing bear his name to this very day.

And that's the last anyone in St. Louis ever gave a thought to the streets of the city, which today exist more as a cratered collection of decaying concrete and surprise sinkholes than a carefully plotted system of roadways.

To wit: In a video posted yesterday to the Marine Villa Neighborhood Facebook page by a man named Martin Ellinger, one of our so-called roads can be seen trying to eat an entire damn school bus.

The attempted swallowing occurred at the corner of Illinois and Potomac. In a video shot by Ellinger's Nest camera, an individual can be seen apparently waiting for the bus, which pulls into the frame and slows before maneuvering to the side of the road.

That's when the hungry street decides to strike.

As the bus slows to a stop, its rear passenger tire drops into an enormous pothole, which causes the entire damn vehicle to pitch to one side, toward its would-be passenger.

Perhaps most telling is the reaction of that person, which could be best described as "muted." This is obviously someone who has lived in St. Louis his whole life.

From there the bus just pulls forward like nothing happened (driver is clearly a lifelong St. Louisan too) and the video cuts off as the man who was waiting walks back up to the bus. Common sense suggests both were eaten by an even larger pothole about a quarter-mile down the road, but there's no footage of that one.

Watch the video for yourself below, and stay safe out there. It's getting to the point these days where a man can barely drive around with an entire house's worth of furniture stacked on the roof of his car without imperiling someone.