So many questions, so few answers. Here’s what we know: A video was uploaded to Facebook late last night that shows a car rolling down Cherokee Street with what appears to be two couch frames, three box springs and three mattresses stacked on top.

Skylar Finan uploaded the hot clip, which was taken on the corner outside Yaquis on Cherokee Street at Iowa Avenue. She notes two important details in the caption: “this is the most South City shit ever” and “they didn’t even stop at the deng stop sign.”

Now, in fairness to the unnamed driver ....

Yes, St. Louisans are notorious for slowing instead of stopping at stop signs, but would you stop if you were balancing a veritable full house of furniture on top your car roof? No way. Rolling that stop sign was the responsible thing to do in this situation. Do you see how that tower of furniture wobbles precariously as the car finishes its turn through the intersection? Stopping fully would've been a disaster.

Listen, moving trucks are expensive. And generally you can only book them for daytime hours. What if money is tight? What if you work during the day and on the weekends and you need to move at night? What if you already have a vehicle with four wheels that is very capable of carrying a large load? Have a little empathy!

Instead of seeing a law-breaker who might be low-level endangering the public, one might watch this clip and see echoes of the ingenuity and fortitude on which this great city was built. 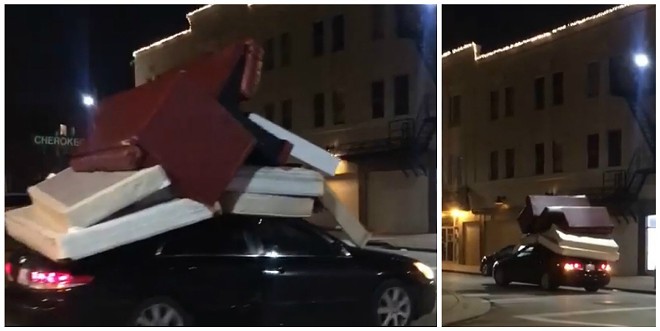