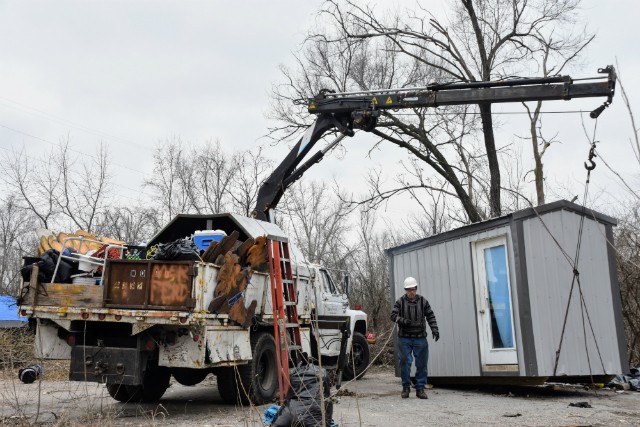 Last week, residents of a pair of East St. Louis homeless camps were given until this morning to clear out. But over the weekend, they learned that the landowners were giving them another seven days.

It was wonderful news, but they were skeptical. Last night, a founder of one of the camps, 59-year-old Robert Gibson, told the RFT he had heard conflicting information.

Ultimately, Gibson chose to believe the extension of time was real, mostly because he had little alternative. He was still packing and sorting all the belongings that had piled up over more than three years of living in a tent atop a concrete slab just across the the railroad tracks from the Mississippi River. He said he planned to move into an old railroad bathhouse where the landlord would charge him $25 per month, but he needed a few more days to get everything together. "If I get arrested, I get arrested."

This morning, as the original 8 a.m. deadline approached, Gibson nervously eyed cars turning onto the road out front. A trio of Saint Louis University students from the student outreach group Labra waited with him. No police or sheriff's vehicles arrived. Nobody from the city's code enforcement division showed up.

By 8:30 a.m., the immediate worry of arrest began to fade, but there was still the task of packing and moving. The two camps have been emptying out for about two weeks. Gibson is ashamed of how some people moved out, leaving piles of trash. He keeps apologizing. "I'm sorry it's such a mess," he says, promising to clean up what he can.

Taron Williams, 45, has been struggling to find a place to go. His wife went to stay with friends on Saturday, and he is hoping to find an apartment for them soon. One of the hurdles has been coming up with money for the application fee. He gets some good news this morning when Pastor Tina Crawford and Joe Loane of Helping Our Homeless hand him $70 in cash — enough to cover the fees.

Williams cries and hugs them. "Y'all are awesome." 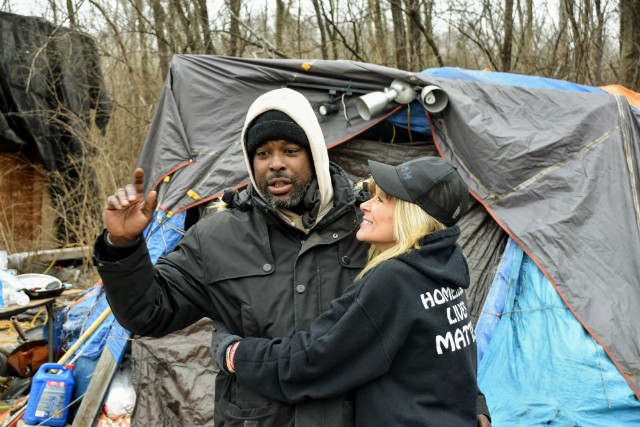 Loane used to lived in the camp. In the beginning, it was a forgotten, out-of-the-way space off a dirt road. But in the past three years, the two main streets that run past the property have been rebuilt and paved. A blacktop bike lane cuts along the western edge.

"When they raised the road out here and raised Front Street, we knew our days were numbered," Loane says.

Crawford says she spoke over the weekend to a son of the property owner, who agreed to the seven-day extension.

The family had allowed the camps to remain for nearly four years, not including the two or three years prior, when lone campers had stayed there.

The architect of the back camp, a resourceful 59-year-old who goes by O.G., spent yesterday with a crew dismantling most of the wood huts that had been built during the past three years. They loaded the boards and panels onto volunteers' trucks to be hauled away and stored.

The back camp included showers and a communal kitchen. Five generators powered lights and small appliances. O.G. says they wanted to live decently. "Why, because I'm out here, can't I have a shower?" he asked. "Why can't I have heat? Why can't I have electricity?"

Now, the back camp is mostly gone, and the last people in the front are working on their exit. Phil Berwick, the tree service owner and artist behind the Merferds, pulled up this morning in a utility truck to help with the move. After filling the truck bed with one residents' belongings, he looped steel cables around a hut that he says was built by the Future Farmers of America and prepared to lift it onto a flatbed trailer.

The two camps have survived largely because of the ingenuity of the people who lived there. (O.G. and Gibson each built separate camps along west side of Mississippi before city officials in St. Louis forced them out.) But they were supported by a loose network of churches, volunteer organizations and friends who regularly donated food, building materials or propane to make life easier. O.G. ticks off a long list of people and organizations, so many he can't remember all the names, or maybe just remembers the first name. "Riverbend Ministries, Steve Pace, Bruce from Mascoutah... " The SLU students who waited with Gibson have been coming weekly since before the camp really formed.

He and Gibson sat around last night and had a couple beers, a toast to the end of an era. Gibson has his next move planned. O.G. is still figuring out his. He is looking for more land.