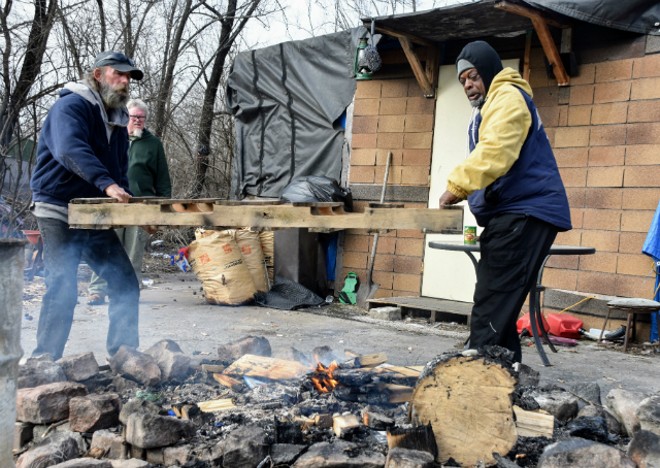 After more than three years living in a tent next to the river in East St. Louis, Robert Gibson may find himself truly homeless next week.

The 59-year-old and the few others remaining in a pair of long-running camps along the Mississippi are set to be evicted at 8 a.m. on Monday.

"It hurts me just thinking about leaving here," he says.

The city of East St. Louis posted the eviction notices nearly a month ago. At the time, eleven or twelve people were living on a concrete slab north of the Casino Queen in Gibson's camp, with another ten or so in the second camp, a series of homemade huts set out of sight in the woods. Gibson says they have been told by intermediaries that the woman who owns the property decided the camps had grown too large and had become a liability.

"This is her land," says Taron Williams, 45, who moved to the camp six or seven months ago. "I'm not mad at the lady. It's just a time thing with me. She could have said 90 days or 'You have to be gone in the spring.'"

He and his wife live at the camp with a pair of dogs and a Persian cat. His wife will go stay with a friend on Friday. Williams was invited to go too, but he does not feel right about it. "I'm not working right now. I don't have anything to give her," he says. Instead, he will keep looking for an apartment through a Housing and Urban Development rental assistance program.

Most of the camp residents have left over the past couple of weeks, drifting off to stay with family or into programs or wherever else they can find. There are now fewer than a half-dozen in the front camp and just one couple remains in the back camp. Anyone still there on Monday will be arrested for trespassing, according to the city's eviction notice.

For the people in the camp, it will mean the end of a community. They often cooked and ate together, sitting around a fire on clear nights with the St. Louis horizon in the distance. Gibson says Fourth of July was a sight.

"We've got a hell of a view of the fireworks," he says.

They knew they were on borrowed time. But as the months and then years passed, Gibson tried to push it to the back of his mind.

For him, the camp has been a place where he could live on his own terms. It was quiet and peaceful.

He says he could not survive the cramped chaos of a shelter, and he will not be eligible to collect partial social security payments until he is 62.

He has a bad heart, he says. A pair of bum hips leave him limping. But he could sit outside the tent he built himself, smoke a cigarette by the fire and drink a beer at night.

He and the few who remain hope that someone might offer a small patch of land where they can move their tents, but they've grown more pessimistic as eviction day closes in.

They have four days. Even if they find a place to go, each person or couple is faced with essentially moving a small apartment, packed with all their belongings, without any vehicles. Gibson says he is so stressed, he is sick.

He has started to give away his pets. Yesterday, Michelle Dodson of the nonprofit Making a Difference picked up his favorite, a cat named Little Baby, and placed her with a foster family. The chunky little kitty was born on Gibson's cot and slept on his shoulder most nights. He says he cried last night after she was gone. "It broke my heart."

Dodson returned this afternoon for a second cat, Pumpkin.

"That's a cat a day you're taking away from me," Gibson says. "You're tearing up my guts."