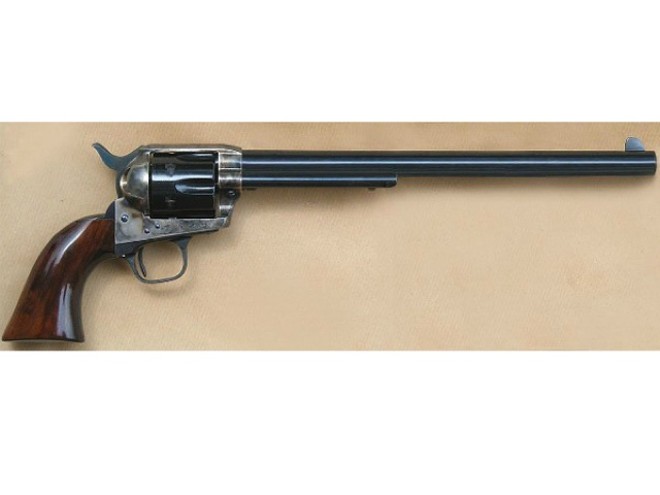 A scandal-scarred Missouri sheriff's office kept an unsanctioned bank account and used it to make some questionable purchases — including a revolver modeled after Wyatt Earp's six-shooter in the gunslinger movie Tombstone, a state audit has found.

The account was opened by former Sheriff Randy Esphorst, who told auditors he wanted to "ensure the monies received were used for the benefit of the sheriff's office," Galloway's report says. But the sheriff is not allowed under the law to open a separate account for his office.

For one thing, it keeps the county's bookkeepers from overseeing taxpayers' money. Esphorst retired at the end of 2016, and new Sheriff John Romanus closed the account when he took office. Romanus told the state he could not find much in the way of records, and he has implemented auditors' recommendations.

Auditors were eventually able to piece together some idea of the deposits and spending with input from Esphorst, bank statements, photos of checks obtained from the bank and interviews with vendors. But the total picture is unclear, auditors concluded.

A total of $66,115 was deposited and $71,469 disbursed from the account over three years. The largest share of the incoming money — $39,720 — was for providing security at the county fair. But the purchases were harder to track. Esphorst claimed, for example, that he spent $3,500 on bonuses. There's no record of that, and even if there were, that would be illegal, auditors say.

The replica Wyatt Earp revolver cost $786 at a pawn shop, the report says. Esphorst claimed he didn't buy it and doesn't know why the gun was purchased. Romanus told auditors he had never seen the pistol and it wasn't in the sheriff's office inventory.

There were also payments to restaurants that the former sheriff said were for food at meetings and deputy lunches, donations to charities and payments to a deputy sheriff.

"Taxpayers expect purchases by the sheriff's office to have a clear benefit to public safety in their community, but our audit found this was not always the case," Galloway said in a written statement.

Esphorst drew some heat during his last year in office after a business owner applying for a concealed-carry permit snapped pics of photos the conservative sheriff had displayed in the office. They included fake booking photos of President Obama and bogus images of former Secretary of State Hillary Clinton being led away in handcuffs.

Esphorst told the St. Louis Post-Dispatch it was just "political humor" and took them down.

He was later sued when one of his former deputies, Marty Rainey, was arrested on federal sex assault charges, accused of sexually abusing four women and luring a underage girl into prostitution. Rainey later used a bed sheet to hang himself in jail.

Last year, after Esphort's departure, another sheriff's deputy, 33-year-old Matthew Hutchings, was accused of sexually abusing a woman while he was on duty. A Missouri State Highway Patrol investigator reported that Hutchings told him he thought the woman's protestations were "playful." Charges of sodomy and sexual abuse are still pending in that case.