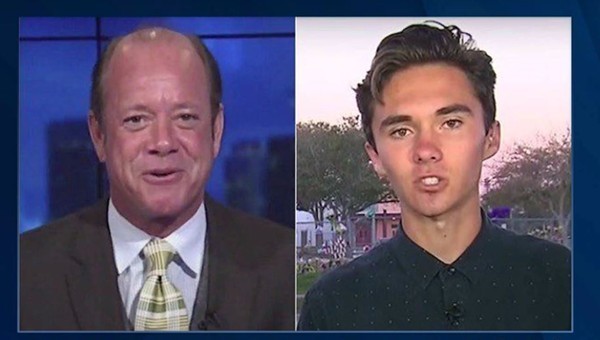 Jamie Allman, the TV and radio host who lost both his St. Louis media gigs after tweeting about ramming a "hot poker" up the ass of Parkland shooting survivor David Hogg, is staging a comeback.

On Monday, KXFN announced that Allman would take over as morning host. The station broadcasts as "The Answer" on 105.3 FM and 1380 AM. According to its Facebook post, Allman's distinctive brand of radio hosting — which combines the easygoing ramblings of a middle-aged Jimmie Buffet fan with the unhinged political rantings of a Tea Party Facebook group — will officially debut on its airwaves February 28.

The news of Allman's return, first reported by St. Louis Post-Dispatch, means he'll be joining the same station that hosts fellow conservative bomb throwers Ed Martin and Dana Loesch. In an interview with the Post, KXFN station generation manager Gregory Lhamon described Allman as "bright, passionate, and asks tough questions when he interviews political leaders. He’ll keep them on their toes, that’s for sure."

But it wasn't Allman's performance as a political pundit that got him into trouble with his employers last year. On March 26, 2018, Allman jumped into a Twitter thread to criticize Hogg, one of the young survivors of the mass shooting at Stoneman Douglas High School the previous month.

Instead of thoughtful commentary, Allman brightly, passionately tweeted about how he was preparing to "ram a hot poker up David Hogg's ass tomorrow." 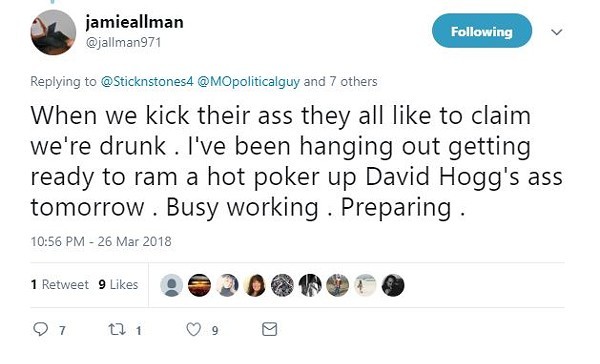 Within days, the tweet had made international news. Advertisers began to drop out. By the end of the following week Allman had been tossed from both his jobs, hosting The Allman Report on ABC affiliate KDNL (owned by conservative broadcaster Sinclair) as well as his gig hosting Allman In the Morning on KFTK (97.1 FM).

In response, Allman sued the owner of KFTK, alleging wrongful termination. The lawsuit was eventually transferred to federal court and ended in a mediated settlement.

As for the now-deleted tweet, Allman has spent these ten months arguing that he never intended "hot poker" comment to be taken seriously. Shortly after his firing, he wrote in a Facebook post, "No sensible person could see that tweet as a threat." He's also argued that he was unfairly punished for deploying a graphic metaphor of sexual violence because a similar phrase appears in movies, such as Reservoir Dogs.

And Allman hasn't been silenced by that punishment. He's cultivated a following for a morning podcast, "Radio Free Allman," which is also streamed to Facebook.

During his show this morning, Allman mentioned the Post-Dispatch's reporting of his return to the airwaves, and he hinted that he still plans to sue the newspaper — and others — that reported that he'd literally threatened to sexually assault Hogg.

"It was false that I did that," Allman said. He added that "it won't be easy" for the news outlets that attacked him "when I pursue my third string of my comeback." During the show, Allman told his listeners that the morning show would stay the same in its new home on KXFN.

And on social media, Allman seems unchastened by the controversy.