Bike Sharing Is Dead in St. Louis (For Now) 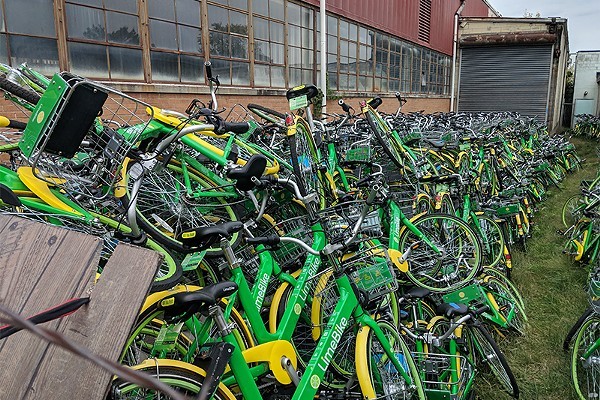 Ten months after bike sharing companies turned St. Louis streets into a mishmash of brightly colored bicycles, Lime, which first launched its fleet in April 2018, is calling it quits on the traditional pedals-and-gears mode of transport.

In a statement, Lime spokesman Norm Sterzenbach confirmed that the company — which at one point managed a St. Louis bike fleet of 1,500 — is now acting to replace the bike stock with its electric scooters.

"In St. Louis and the surrounding communities, Lime riders are overwhelmingly choosing Lime electric products as their preferred micromobility vehicles," Sterzenbach said. "In the coming weeks we will be replacing Lime bikes with electric scooters throughout the greater St. Louis metro."

But bicycle fans aren't entirely without hope. Sterzenbach confirmed that the company is planning to bring electric-assist bicycles to St. Louis at some point this year. Because, yeah, who has the energy to pedal?

In an email, Sterzenbach declined to clarify the reason for the company's retreat from the iconic green bikes. He also did not specify the number of scooters that the company plans to deploy in addition to the many, many scooters already on city streets.

The news means that St. Louis has lost the entirety of its bike-sharing capacity.

In July, Chinese bike-sharing company Ofo announced that it was pulling its own bike fleet from St. Louis and other U.S. cities. As Riverfront Times reported in August, hundreds of Ofo bikes were likely lost, chopped, stolen or otherwise destroyed.

Lime, too, struggled to keep up with the necessary repairs on its bike fleet, and a shortage of parts forced the company to stockpile hundreds of bikes in an Dogtown alley.

And while the scooters have proven popular — they're fun as hell to ride — they're also causing injuries for users, bringing as many as eleven injuries per week to emergency rooms, according to a report from St. Louis Public Radio last month. In November, four doctors affiliated with Washington University wrote a letter to St. Louis Mayor Lyda Krewson asking her to convene a task force to craft better scooter safety policies.

Those safety concerns remain unresolved, and with the influx of Lime scooters set to join the local transportation marketplace — which also includes a fleet operated by rival scooter company Bird — some public officials want Lime to slow down and reconsider.

I emailed the Lime Bike rep and Streets with the same position. We have the first scooter safety task force meeting today and I'll definitely be bringing it up. We should not allow E bikes until we get regular bikes back and a handle on the safety of these electronic devices.


Ingrassia said on Twitter that the Board of Aldermen would likely hold a meeting on the matter when its new session begins in April.