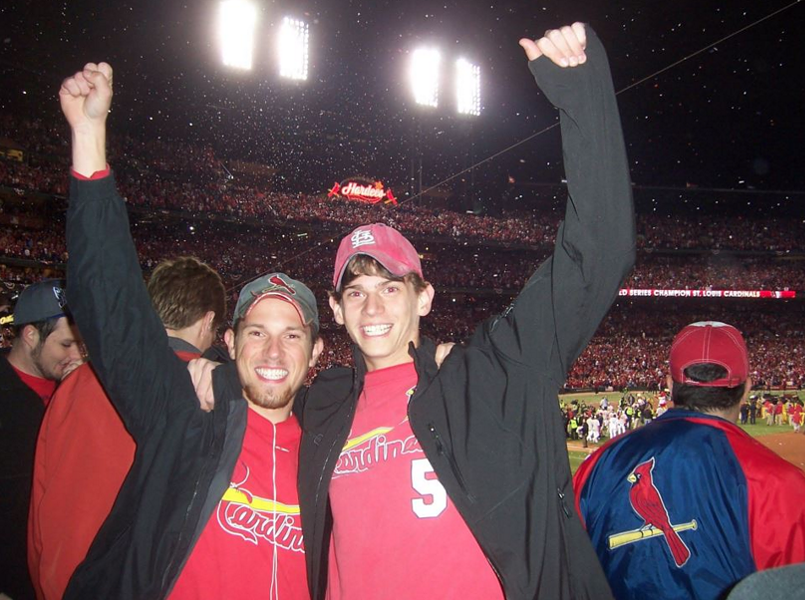 The optimism of the Rams' Opening Day was damp in 2015. We all feared, and rightly so, that it would be the team's last season in St. Louis.

Nine family members had tickets for the game. My brother and I did not. “Wanna spin-move?” Connor asked as we tailgated. (Spin-moving is what I call my method of sneaking into sporting events.)

“Do you wanna buy tickets?”

“I’m not paying a single cent to Stan Slimeball. Besides, the game isn’t what’s important. This tailgate is. We’re here on a beautiful morning with our family, drinking beer and listening to music and eating and laughing.”

Connor nodded. “You have a point, Trev. But hey — we’re here anyway. Let’s at least check it out.”

I knew that tactic well; I had used it many times — at the Super Bowl, World Series Game 7 at Busch Stadium, the Game of the Century in college football — to coax friends into joining me for a sneak.

I knew the Dome well, too. There was usually no layer of security behind the ticket takers; just empty staircases that led to the nosebleeds. A gatecrasher’s dream come true.

We walked into the Dome’s lobby, looked at each other, and nodded. Game on.

The spin-move is not elaborate — it doesn’t even require a spin. But it’s effective: I dart past ticket takers and, before they even realize what’s happening, I’m in a crowded concourse, blending in with all the other fans. As I learned during my years as a ticket taker at Blues games, it’s nearly foolproof.

I’ve been asked during my career: Do I ever feel guilty about sneaking into games? In my book, Ticketless, I show how the spin-move grew out of a desire to prove myself during a time when nothing else in my life seemed to be going my way. But on that day, it was a political statement. It was a middle finger to Stan Kroenke.

The Rams won that game, against the defending NFC-Champion Seahawks by stuffing Marshawn Lynch on 4th down in OT. That moment, on Opening Day, with visions of a playoff berth dancing in our heads, was probably the pinnacle of St. Louis Rams football between 2005 and 2015.

Of course, the Rams went 4-8 in their next 12 games and were well out of the playoff race for their final home game of the season: a Thursday night matchup against Tampa Bay.

Connor and I attended the Blues game (with tickets) that same evening. But we couldn’t miss the last-ever quarter of Rams football in St. Louis, so we drove to the Dome after the hockey game.

As we jogged toward the stadium, we asked fans walking the other way if we could have their ticket stubs. Eventually, we got two, but we didn’t need them. We walked into the Dome’s lobby; the turnstiles had been dragged to the side. The few security guards and ushers in the area seemed singularly focused on making sure no one left the building with beer still in their cups (which would be a liability for the team).

We put our heads down and walked right in. A guard probably saw us and didn’t care.

We met up with our family in a half-empty Section 406, where we’d spent so many Sunday afternoons.

A couple hundred fans made their way down to the lower level when the clock hit 0:00. Marshall Faulk and Kurt Warner were on the NFL Network’s TV set along the sideline, and we fans were begging them to do something, anything, in their power to help us. “Keep the Rams! Keep the Rams!” was the chant.

I remember, as I walked out of that section, glancing over my shoulder for one last glimpse of the red seats, the tan, metal railings — that dark, dull, but goddamn beautiful Dome.

What had kept me coming back, loss after loss after loss, was a vision: The Dome, in the moments before kickoff of a playoff game, packed to the brim with fans who finally had a reason to go crazy, their passion echoing off those railings in every direction.

We all know what happened.

The owner took the team we poured our hearts and souls into. More importantly, he took my family’s tailgates: our most consistent, most fun, most meaningful gatherings. The strongest connection my mom and her two brothers had to their father, who loved football more than life itself, and who died when he was far too young.

To anyone who asks me, as an ESPN reporter did a couple of weeks ago, “Do you ever feel bad about sneaking into games?”

Read my lips: I regret nothing.

Trevor Kraus is a St. Louisan, diehard sports fan, and writer. This is an excerpt from his new book, Ticketless: How Sneaking Into The Super Bowl And Everything Else (Almost) Held My Life Together.