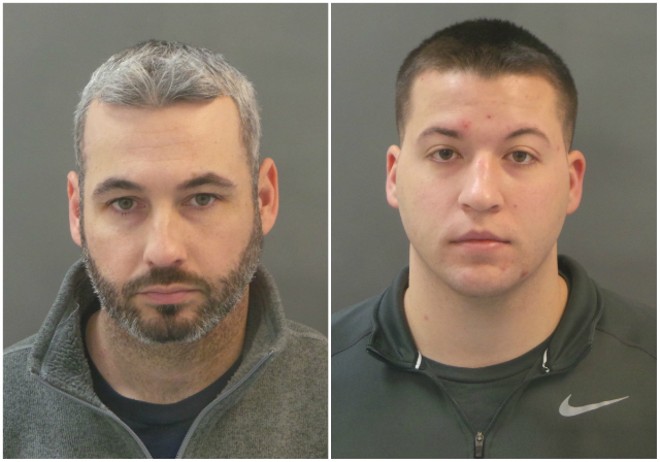 The two St. Louis police officers charged in an alleged attack on a bar patron have been booked.

Officer William Olsten posted bond on on Tuesday and Schmitt bonded out this morning, according to court records.

The two are accused of ganging up on a 22-year-old last spring in the parking lot of Bomber O'Brien's in south city. The alleged victim, identified as "S.D." in court papers, told investigators he was sitting alone in his van during the early morning hours of April 27 when he saw Schmitt come out of the bar and get in his truck, parked next to the van.

Schmitt had been drinking at Bomber O'Brien's with Olsten and two other cops that night, police say.

S.D. says he watched Schmitt drive to another part of the parking lot, talk to others in his group and then sneak up on the side of S.D.'s van, gun drawn. Then Olsten opened the back door of the van and climbed inside with S.D., according to a probable cause statement.

S.D. told investigators he grabbed his gun "in defense of himself" and jumped out of the van. In the parking lot, he had a brief confrontation with the off-duty cops before trying to back away and return to his van. That's when Olsten grabbed him from behind and slammed him to the ground, he said. S.D.'s gun went off, and Olsten was shot in the hand and upper arm, prosecutors say.

Schmitt then fired on S.D., hitting him multiple times in the arms and legs.

Police investigated the shooting and tried in May to get the St. Louis Circuit Attorney to file charges against S.D. Instead, prosecutors rejected the case and started a parallel investigation, ultimately charging Olsten and Schmitt on Monday, Circuit Attorney Kim Gardner said in a statement.

Both were charged with first-degree assault and armed criminal action. Schmitt was also charged with unlawful use of a weapon. Bond for each officer was $50,000.

Olsten is being sued for a separate incident during which he pepper sprayed protesters and an independent journalist during a September 2017 police protest outside of Busch Stadium.