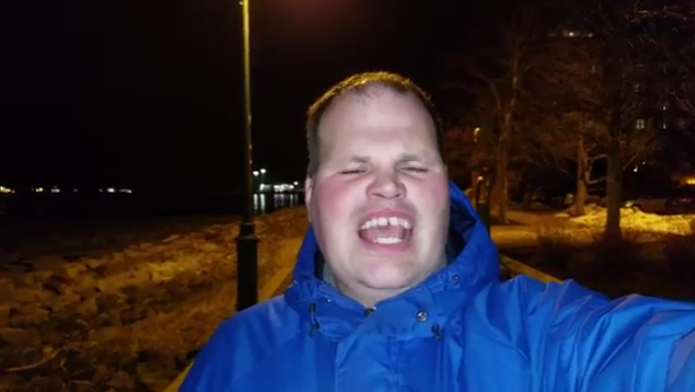 If the myriad closings and cancellations afflicting the Midwest in the face of the latest round of winter weather are any indication, it's fucking cold outside.

But if you're one of those year-round-shorts-wearing lunatics or a jackass Kentucky Governor, you might be holding out for more proof. Consider, then, that no less than the Internet's Best Weatherman himself, Frankie McDonald, has seen fit to take to YouTube and warn the residents of Missouri and Illinois about the dangerous cold snap.

"I want everyone to dress in proper clothes," McDonald bellows in one of the videos. "Wear proper clothing. Dress really warm for the state of Missouri, especially St. Louis and Kansas City, Missouri. It's gonna bring really cold temperatures. Don't even walk too far. Keep your children inside your house and keep your animals inside your houses. "

He further recommends that we turn on our furnaces to keep our houses warm, and says that we should drink lots of green tea, white tea and red tea in order to warm ourselves.

McDonald offers similar advice in a second video directed toward the citizens of Illinois, warning that the weather there is also intolerably cold, especially in Chicago and Springfield. He says Chicago's temperatures will be even colder than those in Antarctica, the North Pole, Nunavut Territory, Mount Everest and Siberia. Sounds about right.


McDonald, a resident of Nova Scotia, is well-known for delivering weather forecasts for cities across the world, with his efforts racking up more than 32 million views on YouTube since he joined in 2011. His work has brought him legions of fans, including some 185,000 followers on YouTube. He's even warned those of us in the bi-state area about severe weather on several occasions.

Still, most of his warnings involve major storms. In fact, it's been more than three years since Frankie deigned to deliver a forecast based solely on extreme temperatures.

In other words, tell your shorts-clad friends and Kentucky Governor buddies to buzz off, then huddle by that furnace with several colors of tea. Oh, and let your damn dogs in. It's a cold one out there.