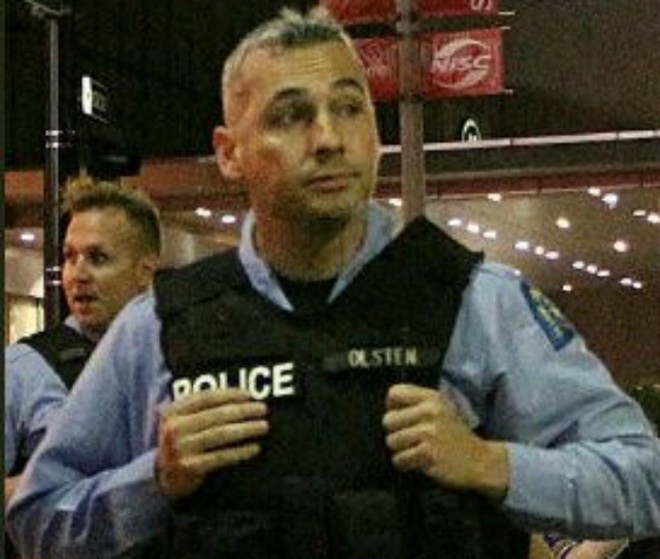 Two St. Louis police officers, including one being sued for civil rights abuse during 2017's protests, have been charged in a shooting last April outside a south city bar.

Officers William Olsten and Joseph Schmitt followed a patron at Bomber O'Brien's outside to his van, where they attacked him, according to a probable cause statement.

The patron, a 22-year-old identified as "S.D." in court papers, told investigators he was sitting alone in his van in the bar's parking lot when the two cops exited the bar. S.D. recognized Schmitt from inside the bar.

S.D. watched as Schmitt, dressed in plain clothes, moved his pickup truck to another part of the lot.  Then the officer slipped up beside S.D.'s van with his gun drawn.

That's when the second cop, Olsten, slid open the side door of S.D.'s van and climbed inside, authorities say. (Prosecutors say that account is backed up by another witness.)

S.D. grabbed his own gun and hopped out onto the parking lot.

"After a brief exchange, S.D. tried to leave by walking back to his van and attempting to get in," according to the statement filed by the St. Louis Circuit Attorney. But the cops weren't done: "As [S.D.] attempted to leave, Olsten grabbed S.D. from behind and slammed him to the ground."

S.D.'s gun fired and Olsten was hit in the hand and upper arm. Schmitt then opened fire on the 22-year-old, hitting him multiple times in the arms and legs. Everyone lived, but S.D. suffered serious injuries, prosecutors say.

The story in the probable cause statement varies in significant ways from what police said in the hours after the shooting. Speaking to reporters that morning, Police Chief John Hayden said the two officers involved were among four cops drinking off duty at Bomber O'Brien's during the early morning hours. Hayden said the initial reports were that the 22-year-old had fired first and one of the officers returned fire with his service weapon.

The chief said in April he expected the 22-year-old to be charged with assault. Nine months later, though, it's the officers who are being charged. Olsten and Schmitt are facing first-degree assault and armed criminal action. Schmitt was also charged with unlawful use of a weapon.

After the shooting, S.D.'s father told Fox2 his son was celebrating his birthday with two friends and were leaving that morning. S.D. had previously had a confrontation with an off-duty cop over some spilled drinks a week before the shooting, the dad said.

"They had an altercation, and the off-duty officer wanted to fight with him," the father told Fox 2. "When he found out it was an off-duty police officer, they told him they didn't want no problems and everything else. And we don't know if this is linked in to what's going on up here or what's going on."

The warrants for Olsten, 33, and Schmitt, 25, were issued at-large, meaning neither was in custody. The paperwork was filed on Monday, three days after another officer, Nathaniel Hendren, was charged with involuntary manslaughter in the killing of fellow officer, 24-year-old Katlyn Alix.

Police have said Hendren and Alix were playing a version of Russian Roulette when he shot her in the chest early Thursday morning at his house. He and a partner were on duty at the time, police say. A visitation for Alix is today at Kutis Funeral Home in south city.

Four other St. Louis police officers were indicted in November on federal charges connected to the beating of an undercover officer who had embedded with protesters during the demonstrations that followed the acquittal of ex-cop Jason Stockley in September 2017. The undercover officer later said they beat him "like Rodney King."

Olsten was a prominent face during the 2017 protests. He is now being sued by an independent journalist for pepper spraying her without provocation during a demonstration outside of a St. Louis Cardinal's game. Heather De Mian says Olsten, a member of the department's special operations unit, blindsided her as she livestreamed the protests from her wheelchair.

Her lawsuit contends that Olsten, among other cops, was out of control that night, challenging one protester to a fight. "Come fuck me up then," he said, according to the suit filed in federal court. The suit says he had to be restrained by another officer.