Pope John Paul II Came to St. Louis 20 Years Ago Saturday and Gave Us a Gift

Twenty years ago this Saturday, my husband gave Pope John Paul II a hockey stick. As any longtime St. Louisan could tell you, this isn't quite as random as it sounds; it's twenty years ago Saturday that the man born Karol Wojtyla came, improbably, to St. Louis.

He was here just 31 hours, but the pope packed that day and a half full. He met President Bill Clinton at the airport, blessed patients from Cardinal Glennon, convinced Governor Mel Carnahan to spare a death-row inmate, presided over the largest mass ever held in the United States at Trans World Dome (now the Dome at America's Center) and met Stan Musial and Rosa Parks. Oh, and he held a youth rally at Kiel Center (now Enterprise Center), speaking to 21,000 Catholic kids from all over the metro area.

That's when a quiet kid from DeSmet Jesuit High School got to give him a gift. My husband doesn't play hockey; in fact, he's never played hockey. The gift was less about affinity for the sport than the fact that the youth rally was in Kiel Center, and hockey is what generally happens there. But it still makes for a great photo.

It's one of the first things I noticed when I first visited my in-laws' home in south county; there's John, kneeling in front of the great pontiff, hockey stick in hand. Perhaps it's one reason I knew I'd met a good one — someone had vetted this guy as a youngster and determined he wasn't the type to knock the holy father upside the head. (Although really, John says, if anyone gave him a security check, he wasn't aware of it. Back in the '90s, no one thought high school boys were dangerous.) When the pope exited the stage, he apparently took his cane and made a gesture like he was shooting a hockey puck. No word on what had happened to the ceremonial stick.

Today, when St. Louis has a population that's smaller than Fresno and our decline is a perpetual topic of conversation, it's almost impossible to imagine a pope visiting us. Maybe it felt like that then, too. By 1999, John Paul had already made trips to the U.S. to visit Boston, New York, Philadelphia, Chicago, and Washington, D.C., among many other U.S. cities across three previous trips. But that year, we became the center of the Catholic universe — and, in some ways, the world. President Clinton had to come here because this time the aging pontiff was making just one American stop. He came to visit us.

In reality, John Paul’s visit was motivated in no small part by his esteem for St. Louis’ archbishop at the time, Justin Rigali, who had previously spent decades in Rome, working in elite positions for three popes. John Paul personally ordained Rigali as a bishop and would ultimately make him a cardinal. Upon arriving at Lambert Airport, he remarked that Rigali had “been close to me since I became Pope twenty years ago.”

But even if the papal visit was as much to pay tribute to an old friend as to honor the city, it made no difference to the throngs of faithful who, if only for a day, could breath the same air as their spiritual father. It must have felt like a miracle, like being chosen by God. Mayor Clarence Harmon declared it "the most important two-day period in St. Louis history."

Even the RFT couldn't get too snarky. Of the pope's homily at the Dome, DJ Wilson and Wm. Stage wrote, "Wednesday was probably the first time the dome was filled and nobody booed."

My husband has never bragged about being on stage with the pope; if anything, he tends to duck and change the subject. It's partly just how he is, but I suspect that it's also that he felt uneasy being up there in front of 21,000 people. Who wouldn't thrill to meeting one of the most influential leaders of the 20th century? And who wouldn't have been paralyzingly nervous to do it as a high school student in front of thousands of other high school students?

In fact, it wasn't until I was talking to him the other night about this anniversary (and trying in vain, I'll have you know, to get him to write this essay instead of me) that I learned the full story of what happened there on stage at the Kiel Center. It wasn't just that John gave something to the pope; the pope gave something to John.

And when, on a frigid night last November, when my water broke all over our nice hardwood floor and I screamed, "John! We have to get to the hospital now," it turns out John was thinking about that moment with John Paul II. He may have forgotten his own cell phone — yes, dear reader, that happened — but he had the presence of mind to bring the rosary that the pope had given him that day twenty years ago in front of all those screaming fans. 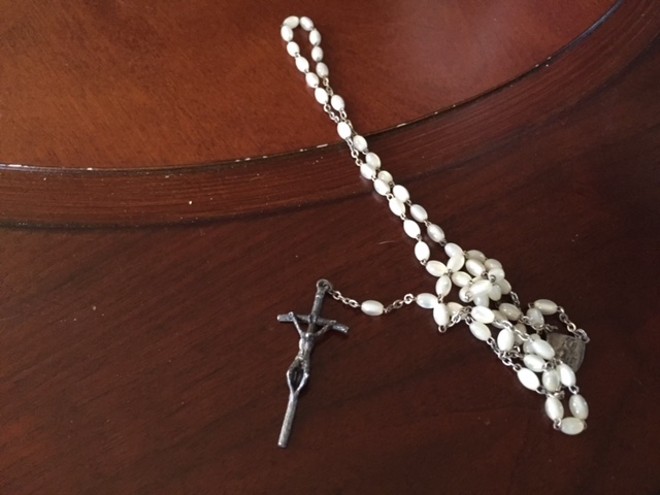 Vivienne was born that night not much more than an hour later. But even though the doctor didn't quite make it to the delivery room in time, we did, rosary secretly tucked into my husband's pocket.

Today we have a very healthy, very happy two-month-old baby girl. It feels like a miracle. And for that, this daughter of a Lutheran preacher would like to thank the former pope.