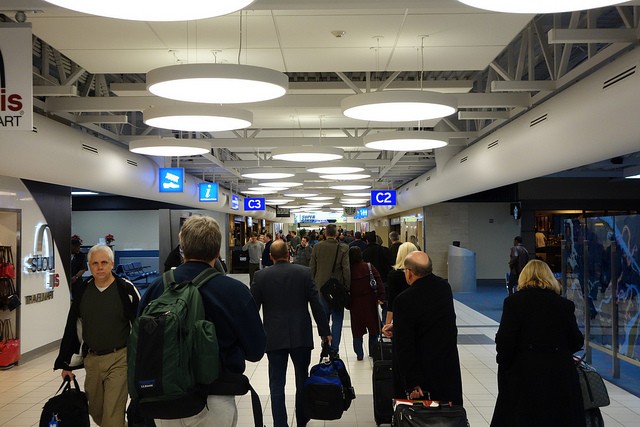 Alderman John Collins-Muhammad had been a co-sponsor of the bill to require a public vote on any deal to privatize St. Louis Lambert International Airport.

But when it came time for the crucial committee vote on the bill today, Muhammad reversed his previous support, voting no. His flip doomed the bill, 3-2.

Unless he or another "no" voter makes a motion to reconsider, and does it soon, the bill is dead this session.

Alderwoman Cara Spencer, who introduced the bill, was audibly angry when reached after the Transportation & Commerce committee meeting.

Alderwoman Carol Howard and Alderman Joe Vaccaro voted in support of the bill. Voting in opposition were Collins-Muhammad, Lisa Middlebrook and Marlene Davis. (Spencer is not a committee member, so didn't get a vote.)

Thanks to a push begun by former Mayor Francis Slay, St. Louis is actively exploring becoming the first major airport in the continental U.S. to lease its operations to a for-profit operator. The airport is currently city-owned, and consultants funded (for now) by philanthropist Rex Sinquefield have been looking into a what kind of deal it could get.

In a public Facebook post, Collins-Muhammad linked his "no" vote to the fact that Spencer did not support his efforts on ward reduction. Previously, city voters agreed to reduce the number of wards in the city; Collins-Muhammad had been one of the most vocal voices last spring in a push to reverse the plan, saying it would reduce black political power in the city.

On Facebook, Collins-Muhammad wrote, "How can you really ask me to stand with you but you have refused to stand with me & my community. The airport is your biggest asset. My communities biggest asset is their voices in city hall! Airport Privatization. Ward Reduction. Don’t count on me, if I can’t count on you. You want a vote. Well my people wanted a vote. I stand by decision to vote no on BB 93 100%."

He added, "I was an original co-sponsor on Board Bill 93 but after speaking to my residents, the process of leasing the airport is something they want to see. I stand behind my ward. They sand in front of me. That’s how’s real democracy works [sic]."

A progressive group called STL Not for Sale has been gathering signatures in an attempt to put the idea to a city-wide vote. But getting enough signatures to make the ballot isn't easy, and Spencer's board bill would have been an easier way to give the public a chance to weigh in.

Today's vote likely dooms that scenario until after April's aldermanic elections, when Spencer (or other privatization critics) would be allowed to introduce a bill all over again.

Spencer signaled she's determined to do just that — but noted that the March Democratic primary, in which she's facing an opponent, could be a wild card.

"If I'm reelected, I absolutely will introduce this bill again," she vowed. "This is the single biggest asset the city has. You're damn right we're going to make sure a vote happens."