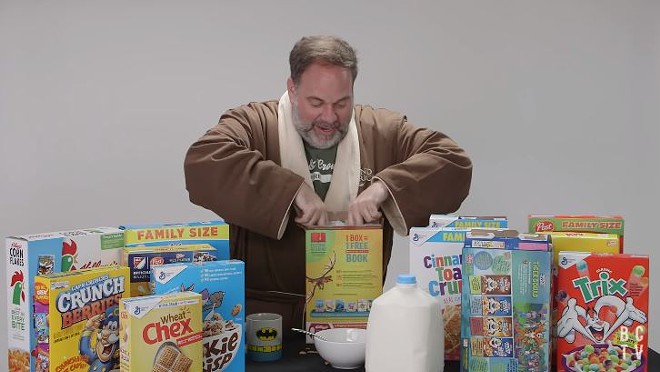 In a video ad posted online, a bathrobe-wearing St. Louis lawyer faces the camera and spends the next five minutes describing, with an artisan's flair, the very best ways to eat cereal. It's been viewed more than 200,000 times.

The attorney's trade secrets include mixing the various brands like a multi-grain cocktail, a feat that requires selecting the proper "basic flake" and layering a foundation of sugary cereal on the bottom — "Why do I do that? Because that's where the milk collects," he notes — before finally finishing the dish with a sprinkling of Cinnamon Toast Crunch.

The attorney, Ed Herman, is no stranger to advertisements, but unlike his other camera-ready appearances shilling the services of his employer, the Brown and Crouppen law firm, "Ed v. Cereal" doesn't spend a second on personal injury or the potential for sizable settlements.


In fact, Herman's lesson in "cereal mixology" doesn't even include the word "winningest," the appellation gracing many of the firm's billboards and TV spots.

Produced by local Cool Fire Studios, the spot is a slick version of a particular genre of YouTube video ad, one that offers content only marginally linked to the product or service being promoted. Like many of those ads, this one starts with a bombastic opening that attempts to grab the viewer's attention long enough to stop them from punching the "skip ad" button.

In this case, it's Herman telling the viewer, "You've been eating cereal wrong your whole life." Who wouldn't pause to listen?

But Herman isn't playing a character. In real life, he says, he opens his pantry every weekend, surveys a selection of a dozen cereal boxes and proceeds to conduct a bowl-bound orchestra of sugar, milk and processed grain.

"I only eat cereal on the weekends, because it's not good for me," Herman tells RFT. "I usually pull out three boxes, construct whatever mix I’m in the mood for and I walk around the house eating my cereal. That is a very true-to-life meal."

And yes, that is Herman's actual bathrobe.

Of course, the firm is paying for the video ads to appear before YouTube videos and on Facebook. Brown and Crouppen is among a pack of ad-hungry law firms that bought more than 13,000 TV ads in the St. Louis market alone in 2018's third quarter.

But it's found success with this particular spot. Herman says it's been viewed 600,000 times on Facebook in addition to all those YouTube views. And a number of YouTube commenters have been so enraptured by Herman's cereal expertise that they stuck around for the entire five-minute-plus runtime, which includes Herman praising the perfect cereal — Cap'n Crunch's Crunch Berries — as well as the finer points of selecting a "basic flake" and how to determine the perfect milk-to-cereal ratio. 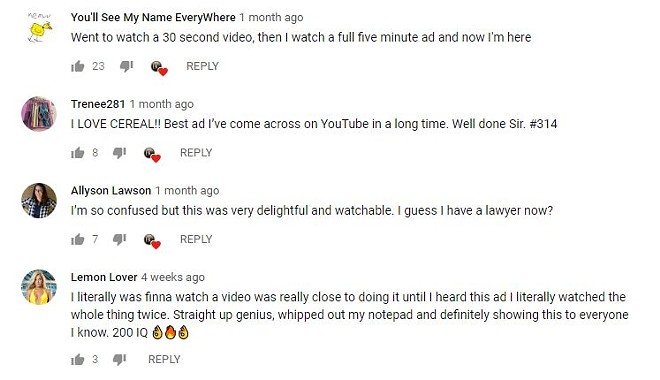 What to avoid? In the video, Herman cautions against combining clashing "milk influencers," like Cocoa Puffs and Fruity Pebbles, or Trix and Count Chocula.

"That's against cereal law," he says. And if the internet's winningest cereal attorney says it, it must be true.