Inspiration takes many forms and today we’ve found it in this young man who was spotted out riding his unicycle in the blizzard. Winter Storm Gia is upon us but he didn’t let it slow his roll. This guy was spotted crossing Manchester Road at Brentwood Boulevard like it ain’t no thing.

Though we’re only in the beginning stages of what might be a record-breaking snowfall in the St. Louis area, the roads are already mega-screwed. Seriously, look at this current map of car congestion: 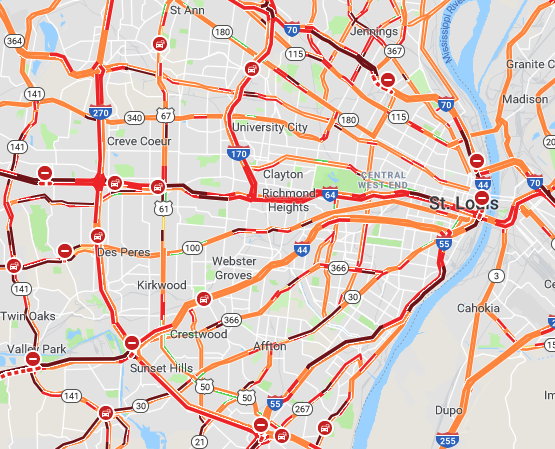 It’s apparently some really slippery snow out there, too. There are reports everywhere of flipped vehicles and cars spinning out or getting stuck on hills. And the traffic situation is so dire that commutes that would normally take a few minutes are stretching on for multiple hours because of the gridlock and having to re-route to get around accidents.

You know who doesn’t deal with this at all, though? Our one-wheeled hero. He just floats above the BS and whips through major intersections like an all-wheel drive angel slicing through clouds.

Way to not let anything stop you, Unicycle Man. To the rest of you: stay off the roads. It’s scary out there.