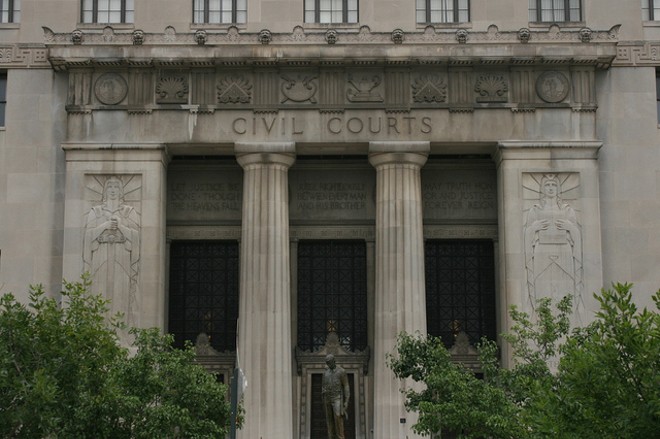 Noticed a lot of advertising from personal injury lawyers on TV? It's not your imagination: A new report says St. Louis is one of the top media markets in the country for such advertising. It concludes that law firms spent $1.2 million in St. Louis in three months of 2018 alone — allowing them to air 13,702 ads on local television. Suffice it to say, that's a lot of commercials.

The report comes from the American Tort Reform Association, the same group that's intent on labeling our court system a "judicial hellhole" for the fact that big corporations frequently find themselves slapped with even bigger penalties here. It would love to see those pesky trial lawyers reined in.

But until or unless that happens, those lawyers are on the hunt for the sort of clients who can bring them a big payday. And, yeah, help hold the evil and/or negligent accountable. Finding those plaintiffs means advertising — and, in Missouri, television advertising.

The new study says that, across the country, lawyers spent $226 million on advertising from July to September 2018 — and a disproportionate amount was in St. Louis:


This study by the American Tort Reform Association reveals that trial lawyer advertising is not an issue isolated in one community or in one state. Rather, trial lawyers across the United States identify jurisdictions friendly to their work and relentlessly pursue new clients in search of the next large payout from a trial or settlement.

... In the third quarter of 2018, from July through September, nearly three million advertisements for legal services and/or soliciting legal claims aired on local broadcast networks in the 210 local media markets across the United States at an estimated cost of $226 million. As in the second quarter, seven percent of the locally broadcast legal services ads during this three month period aired in seven media markets in four states across the United States. These markets — Los Angeles and San Francisco, California; Tampa-St. Petersburg and Miami-Ft. Lauderdale, Florida; St. Louis and Kansas City, Missouri; and New York, NY — also accounted for nearly 14% of all the local legal services television advertising spending during this time period.

St. Louis ended up getting a particularly large bonanza in the third quarter, the study says, but not because lawyers increased their ad buys. Instead, it was simply a matter of ad rates going up.


Sponsors of local legal services ads in St. Louis increased their quarterly spending by over $350,000 from $870,000 in the second quarter to $1.2 million in the third. This represented a 41% increase. The number of ads aired remained relatively unchanged, however, at just under 14,000 for the quarter. The disparity may be attributed to higher advertising rates charged by local television stations in the third quarter due to greater competition for advertising time. This meant advertisers had to pay more for the same number of ads.


So what could account for soaring ad rates last summer? We're no experts, but we'd be remiss not to mention a friendly little electoral competition in which the soul of the U.S. Senate was thought to be at stake. (Finally, something good to say about Josh Hawley: independent expenditures touting his campaign must have been damn good for the local media market.)

Still, recent history suggests the lawyers were absolutely wise to invest in St. Louis. After all, it was the third quarter of 2018 that saw St. Louis jurors return a staggering $4.69 billion verdict versus Johnson & Johnson — and a St. Louis judge affirm it. In light of that, we wouldn't be surprised to see even more ad spending in the area in 2019.