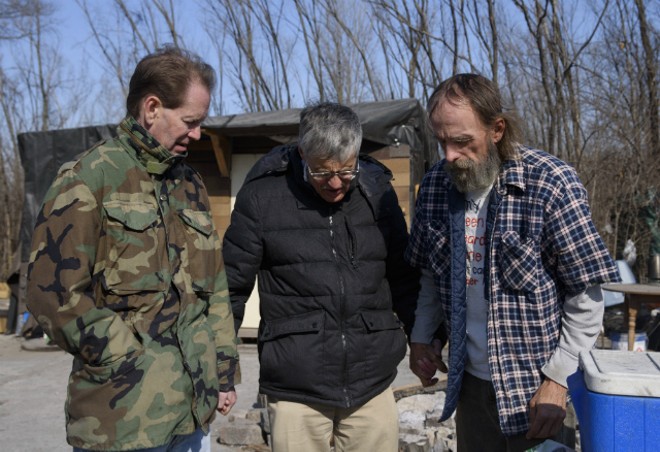 Two men, including a pastor, who were ticketed for feeding St. Louis' homeless population are suing the city in federal court, alleging their right to practice their religion was violated.

The Reverend Ray Redlich and Chris Ohnimus regularly travel the city, praying with people, distributing literature and passing out bologna sandwiches. "We minister to people," says Redlich, who helped run the New Life Evangelistic Center homeless shelter before the city shut it down.
It is what they believe God called them to do, according to the suit filed this morning on their behalf by attorney Dave Roland of the Freedom Center of Missouri.

On Halloween, however, a bike unit police officer stopped the duo outside of Christ Church in the Downtown West neighborhood and told them they were breaking the law. Other officers arrived, and the two men estimate that four police cars along with bike unit officers responded before it was over.

"All for little old us," quips Ohnimus.

The original officer wrote them a summons and handed them a brochure with a list of requirements for operating a "temporary food establishment," along with another titled "Feeding the Homeless." The latter described reasons why such activity wasn't allowed without a permit, citing health concerns as the primary problem.

"The City of St. Louis Department of Health wants to ensure that the homeless receive wholesome and safe food," the brochure reads.

Yet the pair's federal lawsuit argues that the real reason for the city's actions is to funnel homeless people toward "parts of town where their existence will be less noticeable."

Roland says the city doesn't crack down on barbecues, church potlucks, tailgates, parents bringing snacks for school kids or any of the other numerous occasions when people publicly share food made in un-inspected kitchens and without a permit. And his clients don't have the resources to get a permit, he says.

Redlich and Ohnimus showed up in December for their date in municipal court, planning to fight the violation, but found their case wasn't on the docket. City prosecutors had decided not to pursue it, they learned.

"Our focus is on violent crime," Edwards said in the release. "Issuing citations for this type of offense is not a priority for the City of St. Louis."

But Edwards stopped short of saying it wouldn't happen again. Officers still had discretion to issue citations "within the scope of the law," he said. 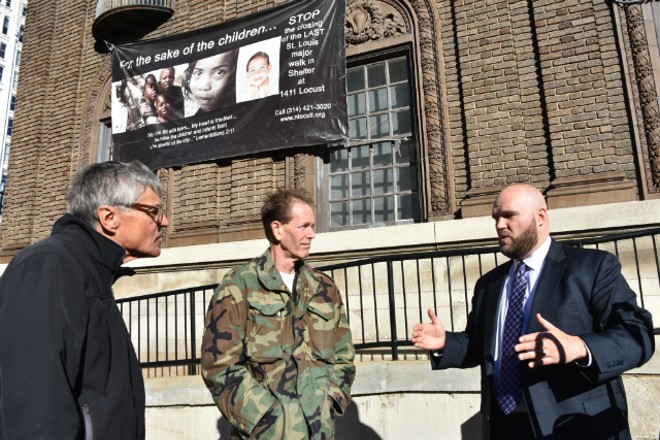 As long as that remains a possibility, people like Redlich and Ohnimus are in jeopardy of being stopped and cited again, Roland says. The city's decision months later not to prosecute "is cold comfort for the people receiving the citations," he adds.

The suit seeks a formal declaration that the portion of city codes outlawing food handouts violates the civil rights of those who help the homeless. Roland says his clients would dismiss their suit if the city would agree in a consent decree not write those types of tickets any more.

Federal appeals courts across the country have been split on religious expression cases. Roland cites a finding from a Florida case in the Eleventh Circuit Court of Appeals that handing out food to the homeless, especially when people are also handing out literature, was protected by the First Amendment.

But other circuits have deferred to Employment Division v. Smith, a Supreme Court decision from 1990 that found so long as a law is religiously neutral — applied to everyone — it doesn't violate the right to free exercise of religion. The case involved two Native American drug counselors in Oregon who were fired for using peyote, which is part of their religion.

Roland argues the decision was dead wrong when it comes to the free exercise clause and should be overturned. But even if it isn't, he says the Supreme Court left the door open for people such as his clients, who allege their rights to freedom of expression, freedom of assembly and equal protection were all violated. Those multiple factors raise the level of scrutiny a law should face, Roland says.

Redlich and Ohnimus are still hopeful the city will issue a clear policy, allowing people to pass out food without fear of being stopped by police. But the men say they will not be deterred either way. They plan to keep driving the streets with sacks of bologna sandwiches.

Update: The city responded this afternoon with a statement from City Counselor Julian Bush. Here is the full statement:

"People want to be protected by their governments from unsafe food, and at the same time be free of officious meddling by governments in their personal affairs. It is sometimes difficult to draw the line between providing adequate protection and imposing too much red tape. If these sandwiches had poisoned those who consumed them there would have been an outcry that there was insufficient regulation; if not, there is a protest of over-regulation. But the difficult task of drawing that line is confided to elected officials, and there is nothing in the constitution that tells those officials where they must draw the line. The City expects to prevail in the litigation."