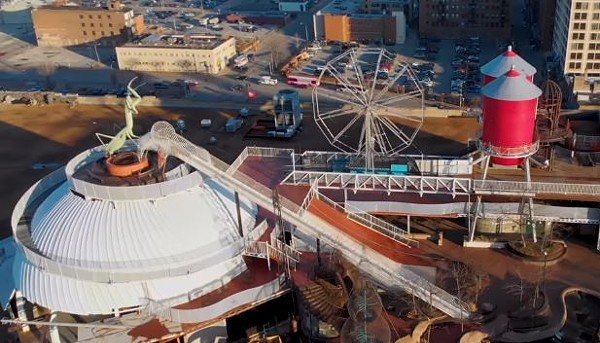 St. Louis' City Museum is getting a new owner and operator. This morning, employees were notified of the sale to Premier Parks LLC, which runs ten amusements parks in the U.S. and Canada.

In an interview, company spokeswoman Traci Blanks confirmed the sale and and an agreement for a 40-year operating lease on the City Museum's building.

Blanks said that Primer Parks could offer City Museum its own expertise in operating and marketing, but she also hinted that attraction's concept "could have application in other markets." When asked to elaborate, Blanks said, "At this point we don't have any specific plans for that."

The sale means the end of the longtime ownership of Dave Jump, who essentially saved the City Museum in the aftermath of the 2011 death of its creator, Bob Cassilly. It was Cassilly's vision — and obsession with architecture, slides and sculpture — which shaped the former warehouse into one of the city's biggest tourist draws.

In a press release, Jump said he is grateful "for the creative, hard work of the staff before and after Bob’s death. That group and the new operators will carry forward the magic that is City Museum."

The sentiment was echoed by the new owners. In the press release, Premier Parks CEO Kieran Burke stated that the current staff and workers will retain their roles in the operation.

"We plan to keep the same staff and vision for the museum while infusing some of our resources so that City Museum will continue to grow and expand," Burke said.

Museum director Rick Erwin tells Riverfront Times that he doesn't expect the changes to alter the identity of the City Museum, which he credits to the energy and effort of the the small group of artists and builders known as the "Cassilly Crew."

"This has been a long time coming," Erwin said. He noted that the City Museum has at times struggled with the technical aspects of the business. With Premier Parks involved, Erwin suggested that his crew could handle the things they're already great at, like building slides.

"It's a good partnership," Erwin said. "They really enjoy what we do, and they've been very honest and straightforward that that's what they want. The City Museum will stay the same."