The St. Louis Guardian is a real newspaper — at least, in the most technical sense of the word. Last Friday, a the single-sheet publication appeared at various gas stations and corner shops around St. Louis, its masthead carrying the slogan, "The News Behind the News."

The newspaper is unlikely to win any awards for its journalism: Its pages contain a mix of election overview, stories repurposed from the Associated Press and editorials defending its very existence. But it does one critical thing: It allows its backer to assert that he is indeed publishing a newspaper. And that, he insists in an editorial first published to Facebook and later to the Guardian's own front page, means the RFT was wrong to call his enterprise a "fake newspaper."

"As many of my friends know I have been writing books, articles and producing video content for the last decade. Well, because I am a black man that is not controlled by anyone I am once again under attack!" publisher Anthony McDonald writes.

In the editorial, McDonald claims that an RFT reporter "repeatedly told me that my newspaper is fake because I do not write news the way the traditional white publications has deemed fit." The piece concludes, "Sorry Riverfront Times but I’m not under white rule!!!!"

As the RFT first reported, McDonald previously worked for the mayoral campaign of the president of St. Louis' Board of Aldermen, Lewis Reed. Since launching as a Facebook page earlier this month, the Guardian has primarily published negative video ads targeting one of Reed's opponents for reelection in the March primary: state Senator Jamilah Nasheed (D-St. Louis).

In a phone interview last Tuesday, McDonald acknowledged that he and a team of three produced the videos, all of which fit the style and substance of political attack ads, complete with an ominous narrator and an on-screen disclaimer stating that the ad "is not authorized by any candidate or candidates committee."

McDonald, though, insists the videos are pieces of informational reporting for voters who would otherwise be ignorant that, as one ad claims, horses are terrified of Jamilah Nasheed because she voted to support a 2010 horse meat legalization bill that never became law.

"We are a non-traditional news source," McDonald contends. "We have the liberty to write our news and to make content at our own discretion. Our intention is not to 'attack' Jamilah Nasheed; our intention is to inform our particular readers on who their elected officials are and to let them understand, in-depth, their voting record."

In 2013, McDonald donated $2,900 to Reed's mayoral campaign and also received campaign payments totaling $1,500 for producing graphics and video content. He says he's not currently being paid by any candidate, and he does not appear on Reed's most recent finance report, filed in October. But he also  acknowledges his own recent efforts to "solicit" work with Reed's campaign.

That's why, McDonald says, he uploaded what appears to be a new Reed campaign ad to his personal YouTube channel on December 14, highlighting the incumbent's crime prevention plan. The 30-second ad ended with Reed's official campaign logo and disclosure text, "Paid for by the committee to elect Reed." 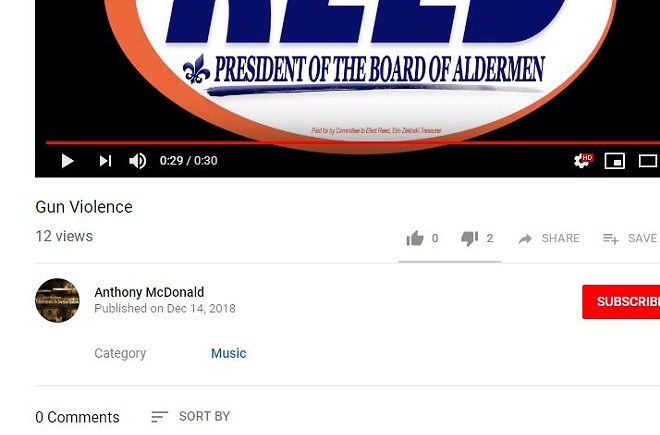 But according to McDonald (and seconded by Reed in a separate interview), the footage wasn't an original production for Reed's 2018 re-election committee, but rather clips and audio McDonald spliced together from ads that ran during Reed's unsuccessful mayoral campaign in 2016 and 2017.

McDonald says he made the video to pitch the new campaign on his services.

"We did want to present it to [Reed] to see if this was something that we can actually solicit to him for sale," McDonald says, claiming that his team has fashioned a similar "mock video" to present to the Nasheed campaign.

McDonald said these efforts "have nothing to do with the newspaper." Questioned about the apparent conflict of interest between the two ventures, he says he doesn't see any problem with publishing a journalism-oriented outlet while also soliciting business from candidates covered by his newspaper.

"We're not being unethical," he responds. "I’m not in business with these candidates; I made independent videos."

(At this point in the interview, this reporter told McDonald that operating a newspaper under that arrangement would likely present ethical problems to most newspapers. I did not, however, compare the Guardian to "traditional white publications," as McDonald later claimed in his editorial.)

As for Reed, he told RFT last week that he personally liked the Guardian's recent output and McDonald's "mock video" and expressed interest in licensing the footage for campaign use.

Yet after RFT first reported on McDonald’s activities, he apparently deleted the “mock video” from his YouTube page.

McDonald also insists, in his conversation with the RFT last Tuesday, that the Guardian is a legitimate news outlet, one that would soon be going to print. Sure enough, two days later, on December 20, its Facebook page published "Our response to the RFT" — including a photo of the broadsheet coming off the line at the printer.

On Friday, political observers quickly tracked down copies at a gas station on the northwest side of the city. (McDonald did not respond to our follow-up questions asking where we could get a copy.)

Beyond the editorials criticizing the RFT and defending its own existence, the newspaper's main piece of journalism in its first issue is a story summarizing the backgrounds of the candidates competing for the presidency of the Board of Aldermen — but, like the Facebook page, the Guardian's print edition seems tilted against Nasheed.

The story, which carries the byline of Rashida Nakanjako, casts Reed's accomplishments in glowing terms, deploying a tone that wouldn't sound out of place on Reed's own campaign website. The incumbent is described as "passionate about neighborhood development" and the force behind "ground-breaking initiatives," responsible for creating hundreds of jobs.

In contrast, the section devoted to Reed's opponent Alderwoman Megan Ellyia Green chides the alderwoman's voting record as "not quite as progressive as we were hoping it to be." It also notes her sponsorship of a "controversial non-tradition [sic] stance on marijuana legalization that will promote uncontrolled sales and distribution of marijuana with little oversight" — a line that uncannily mirrors the arguments Reed himself deployed while opposing Green's unsuccessful attempt to essentially legalize cannabis in St. Louis. (Instead of Green's ambitious bill, Reed's bill, which reduced fines for marijuana possession, became law in 2018.)

Notably, while the Guardian story notes that Green was first elected in 2014 "with the help of her biggest opponent Lewis E. Reed," the story omits the main reasons that Reed's and Green's relationship soured, both of which took place after her election in 2014. Those reasons include A) Green claiming that "loved ones" had been offered bribes for her support on an NFL stadium deal, followed by Reed calling Green a liar, and B) Reed appearing on Bob Romanik's racist radio show and chuckling along as the host trashed Green as a "skanky ass bitch" and "alderbitch."

Instead, it describes Nasheed's "challenging" childhood, including the assertion that Nasheed had stabbed a fellow gang member and that her "delinquency caused her family to get evicted from their housing project apartment due to her continuous rebellion." Those details appear to come from a 2013 Missouri Times profile on Nasheed.

The paper also dedicates a back-page story to Nasheed's voting record, pointing out that she voted for a 2014 Senate bill seeking to regulate the payday loan industry. (The bill passed the Missouri House that year, but was ultimately vetoed by Governor Jay Nixon for being too soft on the predatory loan industry.)

But the nature of election law likely makes the Guardian's actions totally legal, cautions Gregory Magarian, a professor at Washington University School of Law. McDonald may have his hands in multiple pots by running the Guardian while simultaneously soliciting candidates for outside paid work, a conflict of interest that makes the Society of Professional Journalists Code of Ethics burst into flames. But to show a violation of election law, critics would have to prove that McDonald and any candidate he supported were coordinating their strategy and messaging.

"The big step is coordination," Magarian says, adding, "Stuff like that is notoriously difficult to prove, because it’s pretty easy for people to coordinate and not leave any record that they did so."