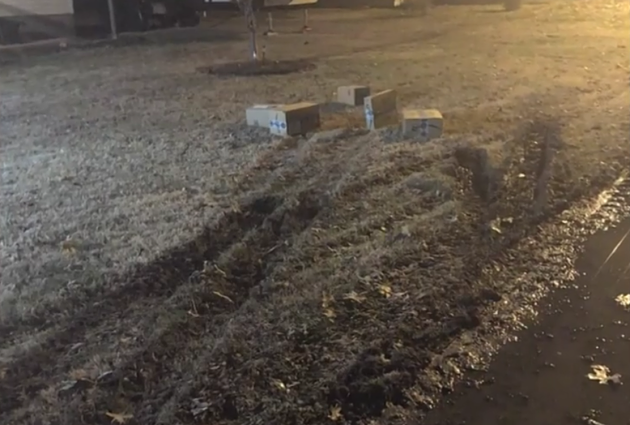 The holidays can be a stressful time for everyone.

Parents are pushed to their very limits by the spoiled demands of their horrible, bratty kids. Those same kids face the constant surveillance of an obese, bearded adult with an unnerving interest in children and an army of shelved elves cataloging their every move. And of course, every decent able-bodied man and woman in the country is exhausted from tirelessly fighting in the trenches as the War on Christmas stretches into yet another year.

But even as we all struggle to make it through another holiday season, we would do well to spare a thought for the most overtaxed group of them all: the humble Amazon delivery driver. Considering the veritable mountain of packages each must ferry to its destination before the year's end, it's understandable that they wouldn't always be operating at their best.

It's a lesson Sherri Pruitt of Fairmont City, Illinois, learned the hard way this week, when one such overburdened delivery driver apparently simply hurled her packages onto her front lawn, driving their vehicle through the grass and leaving deep tire marks on her property in the process.

Pruitt describes the situation to KMOV as one of “extreme frustration, aggravation as to why somebody would do such a thing."

She says she was waiting on five packages, the last Christmas gifts she needed to secure for the season, and tracking her deliveries with the Amazon app. She'd listed specific instructions when she'd placed the orders, saying that packages should be dropped near her screened porch. To her surprise, a notice on the app informed her on Sunday night that her delivery had been "handed to the resident."

Instead, she found her packages sitting in the middle of her front yard.

“The yard does not constitute being a resident,” Pruitt tells KMOV.

To Pruitt's surprise, nothing she ordered was broken or stolen, though three out of the five packages she picked up off of her lawn contained electronics.

“I thought for sure it was a miracle that nothing had been taken,” she says. She plans to have all future shipments delivered to her place of work.

We reached out to Amazon for comment on the matter, but it seems they're busy.