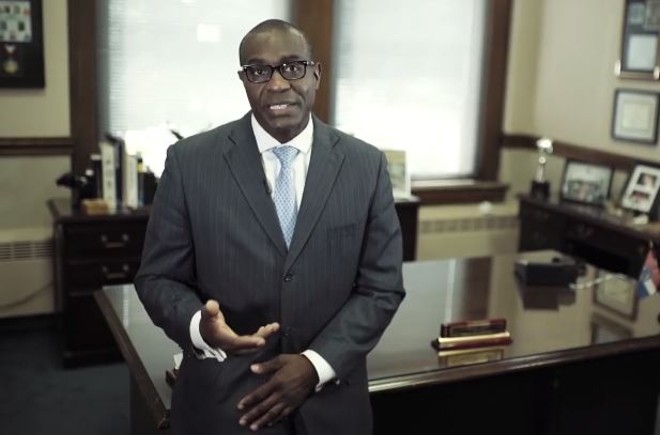 Lewis Reed, the president of the St. Louis Board of Aldermen, maintains that his re-election campaign is not behind the a recent wave of negative Facebook video ads targeting one of his opponents — but he does like the ads, he says, enough that he'd like to see his campaign buy and "repackage" them as official campaign materials.

The attack ads are posted to the Facebook page for something called "the St. Louis Guardian." It appears to be a fake newspaper that lists a non-functioning website, thestlguardian.com. That site is registered to a former video and graphics specialist whom Reed hired during his unsuccessful 2013 campaign for St. Louis mayor.

All three ads posted this month to the faux newspaper page take aim at state Senator Jamilah Nasheed (D-St. Louis), who announced her own campaign for the aldermanic presidency in January with a promise to confront the divisions that afflict St. Louis.

But the first ad released by the St. Louis Guardian, posted December 3, begins with an ominous assertion that "when horses see Jamilah Nasheed, they run."

Titled "Jamilah Nasheed No More Horsing Around," the ad highlights Nasheed's vote as a state representative for a 2010 bill that sought to legalize the processing and selling of horse meat. What the ad doesn't mention, however, is that while the bill indeed passed the Missouri House, it died in a Senate committee and never got close to becoming law. (There are no legal horse meat operations in Missouri. An attempt to open a horse slaughterhouse here in 2014 was derailed by a federal ban on selling horse meat for human consumption.)


The ad also seems to deal loosely with the bill's particulars. The narrator claims that the bill "allows sellers to deceive consumers by not requiring them to label products," even though the bill's text contains an explicit provision requiring products be labeled as horse meat.

Reed says he believes the ad's horse slaughter-centric content is "good and informative," though he allows that his team would "have to tweak" the ad's content if his campaign were to license the spot for official use.

The aldermanic president contends that Nasheed's history is a legitimate source of voter interest.

"It's important for people to know how their legislators are voting," he says, adding that regardless of the bill's eventual defeat, Nasheed's vote still reflects her values. "If she had her way, we would have horse slaughterhouses," Reed says.

"The average voter finds behavior like this shameful," Pattan says. "Jamilah Nasheed has always worked for the people of St. Louis, they know her, and they know misleading, anonymous attacks shouldn't be taken seriously."

But the ad raises additional questions for voters, particularly the blue banner stating the ad was paid for by "the St. Louis Guardian Newspaper." No such entity appears in an online search of businesses registered with the Missouri Secretary of State.

Yet the Facebook page for the St. Louis Guardian goes to some lengths to suggest it's a legitimate outlet.

Its cover photo, for example, features what appears to the front page of a newspaper, complete with volume and edition numbers, a tagline — "The News Behind The News" — and a selection of disparately formatted news stories copied from the Associate Press surrounding a central headline in all-caps and large font: "ST. LOUIS CITY HALL...THE BATTLE FOR ROOM 230."

The page's "about" section also tries to present an air of legitimacy:


The STL Guardian is a weekly print newspaper. Our primary focus is covering news that is prevalent in the local St. Louis community. Our weekly publication highlights issues relating to the social, economic and political climate in the local area. We go deeper into issues that other news media outlets steer away from. The STL Guardian prides ourselves on the in-depth research that we conduct on our featured stories.


But the page's activity is largely dedicated to sharing the stories published by other local media outlets — and sharing video attack ads against Nasheed. Since the December 3 ad highlighting the equine horror allegedly elicited by the state senator, the page has promoted two additional video ads that similarly target her voting record.

The URL listed on the Facebook page's "About" section leads to a non-functioning website. A records search lists the site's registrant as Anthony McDonald Sr., with an address that matches the address connected to multiple businesses McDonald has registered with the Missouri Secretary of State.

McDonald has a history with the Reed campaign. Campaign finance records from July and October 2013 show McDonald was paid more than $1500 for video production and PR services during Reed's campaign for mayor. The July report lists McDonald donating $2,900 to the campaign.

Notably, the address listed by McDonald's contribution is the same one he used to register to the St. Louis Guardian website.

Reed admits that he's known McDonald "for a long, long time," but he claims that he is not aware of McDonald's role in the St. Louis Guardian page or whether he produced the ads attacking Nasheed.

Still, Reed says now that he sees opportunity in the fake newspaper's product, and that he's reached out to the Facebook page to inquire about "purchasing the rights to utilize some of the core concepts within those videos."

McDonald did not respond to a message Monday via his personal Facebook account or a message Reed agreed to pass on. But McDonald is active on the St. Louis Guardian page, and he's personally shared the anti-Nasheed horse meat ad to various groups on Facebook.

On one such share, McDonald wrote, "This is pure animal cruelty! What kind of people make these laws?"

And then there's this: Last week, on December 14, McDonald's YouTube channel quietly posted what initially appeared to be a brand-new campaign ad. This spot, however, was a straightforward piece of campaign material featuring Reed himself stumping on the problem of crime in St. Louis. The ad ended with a "Re-Elect Reed" campaign logo and a declaration that the ad had been paid for by Reed's own campaign committee.

Reed, though, says his campaign is not behind the ad, titled "Gun Violence." He points out that the footage and audio are not actually new — the footage was cut from two separate video ads that Reed's mayoral campaign produced in 2017.

Currently available campaign filings don't show McDonald as either a donor or worker to the Reed campaign, but those records only cover campaign activity through October. And despite Reed's campaign's logo and disclosure language appearing on the re-cut campaign advertisement on McDonald's YouTube channel, Reed tells RFT that he is not paying McDonald for the work.

But that could change.

"If indeed Anthony has done the Guardian, that sounds like the best news ever for us," Reed says. "I will explore any means that I can to get an agreement together with him."