Have You Seen That 'LOVE' Billboard on I-44? Here's The Story 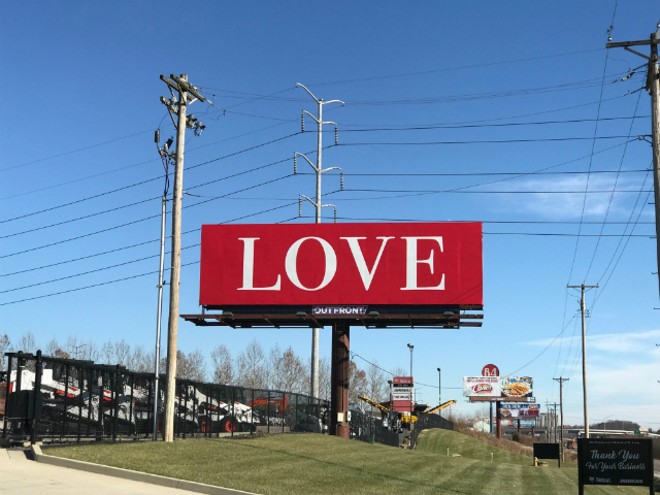 Love is in the air in St. Louis, and one only needs to look at a billboard on eastbound Highway 44 to see it for themselves.

Bright red billboards with the lone word “LOVE” have been popping up in several U.S. cities. On Wednesday, St. Louis received one of its own just west of Highway 141 near Valley Park.

The billboard aims to bring the St. Louis community together through its simple message. The campaign hopes to be as uncontroversial as possible. (So the exact opposite of the billboards that showed up in St. Louis last month depicting Donald Trump as a Jesus-like messenger of God.)

The Love on Every Billboard project was started by John Pogachar, a life and health coach from Spokane, Washington. He began putting up the billboards in his hometown with one goal in mind: to bring love to his city. He later expanded the project to other cities, bringing the number of billboards nationwide to seven. Carole Glauser, cofounder of Attitudinal Healing St. Louis, helped bring one here.

Love on Every Billboard is in the process of becoming a non-profit organization. The majority of the billboards’ costs are currently paid for by Pogachar, individual sponsors such as Glauser and donations. He's taking donations for the project online, and Glauser has created a St. Louis-specific GoFundMe page to raise money for more billboards. All proceeds go toward putting up more LOVE billboards.

Glauser initially met Pogachar in California through a meditation retreat where Pogachar's plan for the project was still just an idea. Glauser eventually heard that Pogachar had gone through with his billboard plans in his hometown, so Glauser set out to bring the LOVE to her hometown.

Pogachar has used these billboards to show support for areas he believes to be in need of love and healing. In October, a billboard was put up in Pittsburgh, Pennsylvania after eleven people were killed in a mass shooting at the Tree of Life Congregation synagogue. Another two were put up in Marshalltown, Iowa following damage caused by a tornado in July.

Glauser hopes the St. Louis billboards will help heal the harm of racial inequality and divisiveness.

“[St. Louis] is constantly in news for racial divisiveness,” Glauser says. “I don’t think that’s who we are.”

As the co-founder of Attitudinal Healing St. Louis, Glauser is no stranger at attempting to get St. Louisans to show a little more love towards one another. The organization provides weekly meetings for ten weeks where trained facilitators show attendees how to shift thoughts of fear to thoughts of love through analyzing Gerald Jampolsky’s book, Teach Only Love.

Pogachar hopes to eventually make his movement international. Additionally, Glauser hopes people will continue to donate to possibly put up even more billboards in St. Louis.

“I trust it will have an impact,” Glauser says.