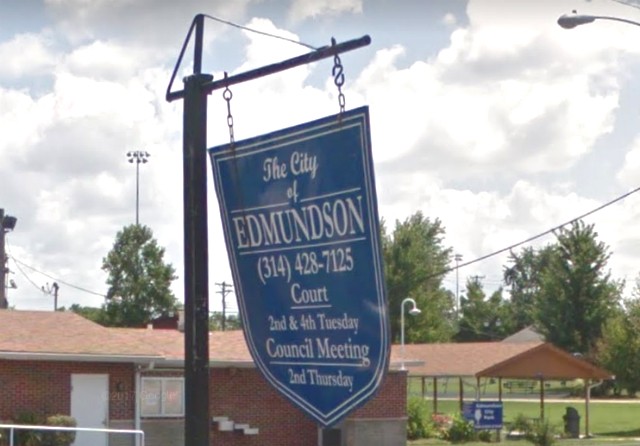 The City of Edmundson ran its courts and police department like a debtors' prison, over-ticketing poor black people and using the terror of jail to squeeze them for high fines and fees, according to a lawsuit.

The class-action suit was filed today by lawyers from ArchCity Defenders and Arnold & Porter on behalf of people who have spent years locked in a maze-like municipal court system.

"If private parties had created and implemented this scheme, enforced it by threatening and imposing indefinite incarceration, and milked poor families of millions of dollars, the law would punish them as extortionists and racketeers, and the community would take steps to prevent them from exploiting the most vulnerable of its members," reads the fiery introduction of the suit.

Tiny Edmundson, population 830, covers less than a quarter mile of land adjacent to St. Louis Lambert International Airport, but its court still collected more than $2.2 million in revenue between 2012 and 2016, according to state records.

It is one of thirteen small north county municipalities previously targeted in a 2016 lawsuit that alleged many of the same abuses. A judge later ruled the suits could go forward but clients would need to file separate cases. This is the second of those suits to be re-filed, following a complaint against Normandy.

The two named plaintiffs, 30-year-old Quinton Thomas and 26-year-old Bradley Jiles, claim the city and surrounding cities ganged up on them, burying them in fines and repeatedly jailing them for failing to pay fines they could never afford.

Individually, the men picked up traffic tickets for offenses that included invalid license plates and running a stop sign in Edmundson and neighboring municipalities. The alleged incidents may have seemed minor, but the suit alleges run-of-the-mill tickets quickly spiral in north county.

In Thomas' case, he couldn't afford to pay a fine from a 2012 ticket in Normandy, leading to a warrant for his arrest. He was stopped two years later in Edmundson for allegedly running a stop light — a charge he denies. Officers ran his name and arrested him. He was held on the Edmundson and Normandy charges for three days in St. Ann, which has a larger jail and often takes inmates from surrounding municipalities.

Thomas was told he could pay $150 and get out, but he didn't have the money, the suit says. After three days, he was technically released but in reality St. Ann just handed him over to officers from St. John, where he had been issued a $100 parking fine at some point.

Thomas claims he hadn't even known about the St. John fine, but he was informed fees had bumped it up to $500. St. John officers threatened to take him to St. Louis County jail if he couldn't come up with at least $120. He borrowed it from his father and was released. These kinds of ultimatums, made absent of bail hearings, are common, the plaintiffs say.

Shortly after his release, he went Edmundson Municipal Court on the stop sign case and told a judge he couldn't pay the $300 fine. Edmundson set up a payment plan, which included fees and what the suit describes as an "exorbitant" interest rate. The attorneys liken it to a loan shark operation, only worse because small cities like Edmundson trade on their authority as government entities to give the "patina of legitimacy" to what is really extortion.

The city preys upon people who can't afford attorneys and assigns fines without regard for defendants' ability to pay, a violation of state and federal regulations, the suit says.

The complaint notes that Edmundson Mayor John Gwaltney has previously pushed the city's cops to write more tickets, making a none-too-subtle reference to their paychecks.

“I wish to take this opportunity to remind you that the tickets that you write do add to the revenue on which the P. D. budget is established and will directly affect pay adjustments at budget time,” Gwaltney wrote in a 2014 memo to police.

Gwaltney was not in the office and the city attorney was not available to comment on the suit, an Edmundson employee told the Riverfront Times today.

ArchCity says thousands of people have been trapped in seemingly endless court cycles, often getting passed among north county municipalities. Often, they face the same faces in shifting roles. A prosecutor or city attorney in one municipality may turn up on a different day as a judge in a neighboring city.

People with enough money can just pay their fines and move on. But the system is rigged against the poor, whom are often scared even to show up for court because they risk being jailed under terrible conditions if they can't come up with enough money on the spot, the suit says.

“Our clients still struggle to escape the deep poverty caused by the predatory practices of Edmundson and neighboring municipalities," ArchCity Executive Director Blake Strode said in a news release. "This suit is the latest in a series of cases challenging the underlying systemic abuses that robbed our clients and many others of income, time with family, and their liberty."