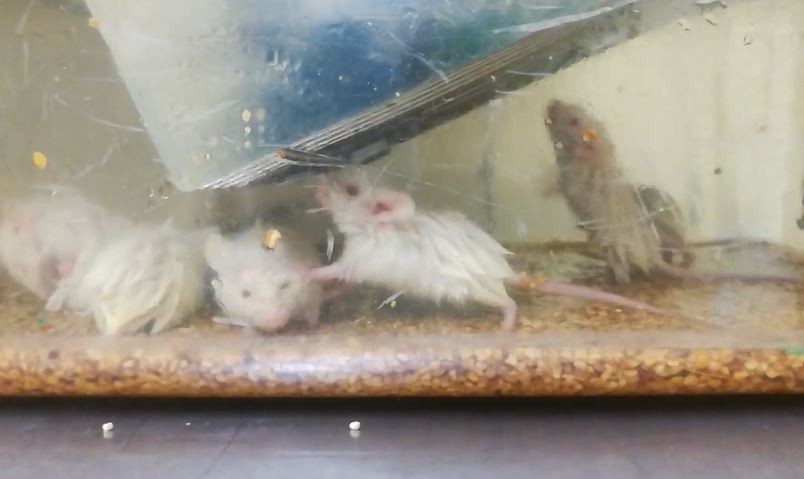 A whistleblower who secretly filmed inside an animal testing lab at Washington University is behind new allegations that the school's animals are suffering from "neglect, incompetence and a culture of indifference."

In letters sent to the university and two federal agencies on Wednesday, the national animal rights group People for the Ethical Treatment of Animals, commonly known as PETA, called on officials to investigate the university's labs for animal abuse and breaches in safety protocol.

Video shared with Riverfront Times shows wet mice in cages. Another clip shows a caged pig near what appears to be a pile of excrement left on the floor.

Captions paired with the video, which can be seen below, claim a lab employee played on his or her phone while a dog howled with pain from being cut open. Rodents are widely used in medical studies, and much of PETA's video and complaints surround their treatment. Citing the whistleblower, PETA alleges rodents were stuffed in small cages and left to suffer, and others were stitched to each other to test treatments for sepsis. In some cases, PETA claims, the rodents were abandoned in flooded cages. In others, they died of dehydration.

In a statement from the whistleblower included in the video, the insider said of the lab, "The constant exposure to death and suffering [was] soul-crushingly difficult."


Some of the allegations in PETA's letter to Wash. U included:

— Some employees stuffed gas chambers with more mice than permitted by Wash U’s own guidelines, causing the animals to suffer slow, painful deaths.

— Mice were denied adequate pain relief after experimental surgeries. In some experiments, pairs of mice were stitched together along the length of their bodies and then viruses were injected into one mouse to see whether the other mouse developed antibodies to that virus over time. In other experiments, the tops of mice’s skulls were removed and a brain cap was surgically implanted.

— Employees cut the tips off mice’s tails for genotyping purposes, but failed to use a coagulant as is required by Wash U’s policies. The animals would bleed profusely and blood would be smeared across the cage walls.


PETA has long opposed the use of animals in medical research on practical and moral grounds, and while the animal rights group may be popularly known for its cringingly earnest marketing campaigns — such as the campaign to encourage people to stop using "anti-animal language" and deploying naked activists to protest the fur and wool industry — in this case, PETA says it's playing the role of an institutional watchdog.

There are no eye-catching gimmicks involved in its allegations against the flagship research university. Rather, PETA claims the evidence gathered from the unidentified whistleblower indicates the university has problems both in how it experiments on small rodents, rabbits, pigs and dogs — animals that are often killed in the course of the experiment — but also with what Alka Chandna, PETA's vice president of laboratory investigations, calls "the larger issues" of how experiments are approved in the first place.

In a December 5 letter to Washington University Chancellor Mark Wrighton, Chandna wrote that the evidence shows "the extent to which the lives of the animals in Wash U’s laboratories are considered to be so meaningless, so expendable that they are used without any consideration to alternative methods of gaining knowledge."

In addition to its letter to Wash U.'s chancellor, PETA also sent letters to the National Institute of Health and to the Centers for Disease Control and Prevention.


[W]e take seriously our responsibilities regarding research activities and facilities, including animal welfare. The university is regularly inspected by the U.S. Department of Agriculture, the National Institutes of Health’s Office of Laboratory Animal Welfare, and the Association for the Assessment and Accreditation of Laboratory Animal Care. We cooperate with those entities to ensure that we are complying with applicable laws and standards. We encourage our employees and students to report any concerns about animal welfare to the university, and there are multiple ways to do so, including anonymously. All concerns are taken seriously and investigated appropriately.


This isn't the first time activists have targeted Washington University. In 2016, after years of protest over the use of cats in medical training programs, the school discontinued the practice.

Washington University has also come under fire for the deaths of three lab animals since 2017. The most recent was a dog that died while recovering from surgery in June. According to a report by the U.S. Department of Agriculture, the dog's death may have been prevented, but "lab staff failed to contact the on-call veterinarian."