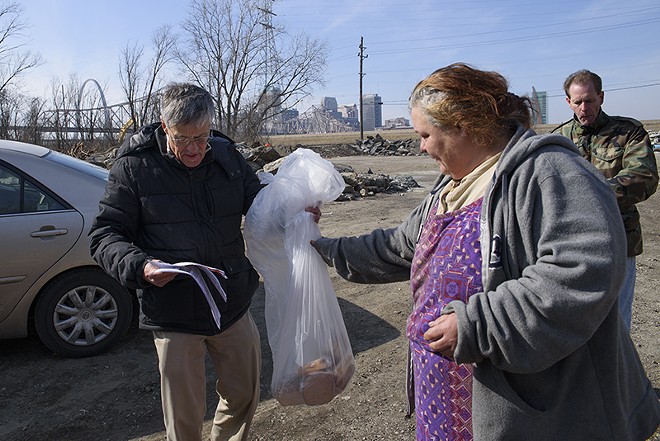 While its officers may continue to ticket people for handing out food without a permit, the city says it has more pressing matters than prosecuting people for trying to feed the hungry.

That's the message from St. Louis Public Safety Director Jimmie Edwards, who on Tuesday responded to questions about why the City Counselor's office decided not to pursue cases against a local minister and activist, both of whom had been cited in October for distributing food to people who are homeless.

"Our focus is on violent crime. Issuing citations for this type of offense is not a priority for the City of St. Louis," Edwards said in the press release, though he added that individual officers retain discretion to issue citations "within the scope of the law."

"It is also within the discretion of the City Counselor’s Office not to pursue charges, as was the case in this incident," Edwards said.

But attorney David Roland says the city's cite-but-don't-prosecute position is far from ideal, and he cautions the city's position isn't clear to those taking legal risks to put food in the hands of those need it.

"Clearly, the city thinks it is unlawful, and they continue to hand out citations for it," says Roland. "We’re just not clear why."

Roland contends that even the city's officers may be confused by the scope of the city's laws. Roland's clients, Reverend Ray Redlich and Chris Ohnimus, are part of the New Life Evangelistic Center's homeless outreach efforts. The duo were patrolling downtown St. Louis on October 31 to distribute bologna sandwiches when they were spotted by a bicycle cop and written a ticket.

A copy of the ticket issued to Redlich shows he was cited for "operating without a permit," but the officer left blank the space reserved the specific city ordinance that had been violated. The ticket included a court summons for December 4.

But when Roland and his clients showed to municipal court on Tuesday morning, their case wasn't on the docket. Roland claims that he still doesn't know what ordinance his clients broke in the first place, and that even a city prosecutors admitted they had no explanation for what permit was apparently required to hand out sandwiches.

This isn't the first time St. Louis has tangled with groups setting out to feed the city's beleaguered homeless homeless. In 2013, the city's health department notified a church group that they needed permits to hand out hot meals, even on private property. At the time, city officials argued that the potential for bacterial outbreak or food poisoning supports cracking down on even well-intentioned operations.

Roland says the argument has little merit and notes that Redlich and Ohnimus weren't setting down lukewarm pots of stew on a park bench, but rather handing out packaged sandwiches to people trying to survive on the streets. Still, they were cited.

"It's a complete smoke screen," he says of the city's reasons for opposing similar food-distribution efforts. "I think there’s a much greater health concern with forcing someone to go without food than allowing them to have food prepared by someone who cares about their welfare."

The legal issue isn't just a technical quibble. The fact that the city won't prosecute do-gooders doesn't change the fact that officers are empowered to write citations against people trying to hand out food, forcing those people show up to court — an obligation that, if missed, could result in a warrant for arrest.

"You're still inconveniencing people dramatically" by forcing them to show to court, Roland notes. "This basically allows the city to harass without ever really allowing the people they’re harassing to paint a target on the problem."

That's why Roland says he wants to force the issue into a court setting, potentially through a federal lawsuit. As long as prosecutors keep dropping cases, he says, there will be no resolution to the issue. He warns that cities like St. Louis or Kansas City — whose own health department recently made headlines after its employees poured bleach on food meant for distribution — will keep finding ways to discourage or destroy grassroots efforts to feed people who are homeless.

"We want to see the judges weigh in on these questions," Roland says. "Can the government really force you to get its permission before you share food with somebody else?"