With No Opposition in Sight, St. Louis' Soccer Stadium Plans Are Rolling Again 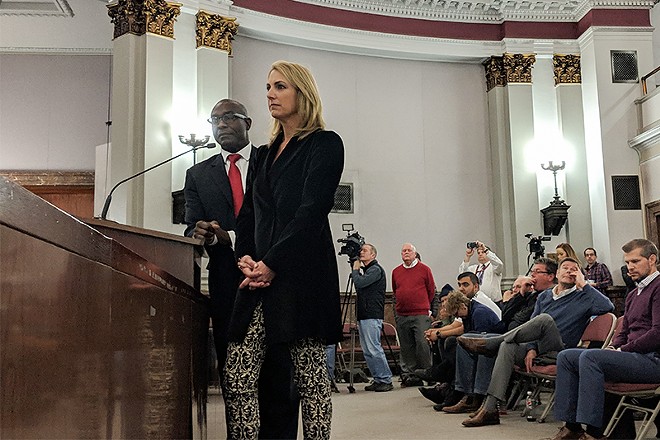 If you're representing an ownership group of millionaires and asking city officials for tens of millions of dollars of tax exemptions in order to build a soccer stadium, it's a pretty good sign when the president of the Board of Aldermen goes up to give you a high-five after a critical vote passes. Even better if the passage was unanimous.

Both of those things happened at the end of Wednesday's three-and-a-half hour meeting of the St. Louis Board of Alderman's Housing, Urban Development and Zoning Committee. By an 8-0 vote, the committee's members approved a non-binding resolution that lays out the broad terms of some $40 million in tax incentives. It's a step that backers say is vital to fund construction on a soccer stadium that could attract Major League Soccer to St. Louis.

The lack of nays reflected the hours of testimony and grilling from committee members, which rarely veered into even a hint of critique. Supporters, many wearing soccer jerseys and scarves, packed the hearing room and lent their energy (and occasional applause) to the ownership group's presentation.

The ownership group is pledging to construct a 20,000-seat stadium without any public funding, and at a cost that would top $230 million even before dealing with MLS' franchise fee — and that little item will cost at least $150 million.

Fronting the ownership group is Carolyn Kindle Betz, director of Enterprise Holdings Foundation. In her opening remarks, she emphasized that this proposal is backed by two St. Louis families with a track records of philanthropy in the region: The group is composed of the Taylor family, which founded car rental giant Enterprise Holdings, and World Wide Technology chief executive Jim Kavanaugh.

"We believe this is a golden opportunity for the city," Betz told the Board. "St. Louis is a three professional sports town, and realistically there will not be another opportunity like this again."

That line — about how there won't be another opportunity — is virtually identical to the sales pitch that failed to woo city voters in 2017. That plan was anchored on diverting millions in new tax revenue to build the stadium, but voters ultimately rejected the proposal.

In retrospect, it turns out that argument that a stadium simply could be not be built without public funding was indeed bullshit. In a way, this latest proposal from the Taylor/Kavanaugh group appears to vindicate the public criticism lobbed at the 2017 ownership group's grab for tax revenue and TIFs.

But the tenor of criticism was largely absent during Wednesday's hearing. No members of the public signed up to speak against it. When the Alders got their turns to speak, many noted that this deal was a clear improvement over the 2017 attempt, and several went out of their way to thank the Taylor family and add their own enthusiasm for the project's terms.

"This is a great day," gushed Deputy Mayor for Development Linda Martinez. "We are being presented here at the city with an amazing proposal."

Even St. Louis Public Schools Superintendent Kelvin Adams called the project a "no-brainer" — which is significant, as the city school system is dependent on property tax revenue. With the proposed suite of tax abatements, that revenue would not come out of the proposed stadium for 30 years, if ever. Incidentally, the Taylor family has donated millions to the city school system, a fact the superintendent himself acknowledged in his remarks.

But beneath all the praise and promises of private financing, the basic problems of running professional sports team remain: Bold claims about economic impact of stadiums are difficult to back-up, and existing research into the local economic effects caution that, rather than creating new economic growth, building stadiums merely diverts existing economic activity in the direction of sporting events.

It may not even be that great of a deal for the ownership group, if you believe the remarks from the group's own lawyer, Thompson Coburn attorney Bill Kuehling. During Wednesday's hearing, Kuehling said the ownership group anticipated facing additional costs in the first years of the franchise's lifetime.

"It is an extremely long-term investment. There are no short-term major returns envisioned," Kuehling said. He added that the assorted tax breaks would keep the new soccer franchise afloat in its first years.

Apparently, that is the reason an ownership group with the resources to marshal hundreds of millions of dollars for stadium construction and the franchise fee is also seeking a break from $27 million in city property taxes.

"The property tax, if that had to apply, could be one of the tipping elements toward making this team financially unviable," Kuehling warned the Board.

Of course, the ownership group and supporters argue that the land being eyed for the stadium, located west of Union Station, is generating zero property tax at the moment, the same amount that it has added to city coffers for decades.

But that argument, essentially "We're getting something from nothing," doesn't sit with John Ammann. A law professor at Saint Louis University, Ammann is a longtime critic of stadium deals, and in 2015 he unsuccessfully sued the city in hopes of putting a new NFL stadium for the Rams to public vote.

"Why are we letting rich people not pay their property taxes?" Ammann said in a phone interview on Wednesday. He believes the city is giving too much away with 30 years of tax write-offs, and he suggested that a shorter abatement, perhaps only ten years, would give the owners breathing room during the early stages of the franchise's lifetime.

Ammann also dismisses Kuehling's notion that the ownership group can't operate a viable business while still paying property taxes. He acknowledges the the ownership's group's efforts to privately finance the stadium, but he remains skeptical. Despite the promises made by the ownership group, he cautions that the details of the future stadium deal between the city and ownership group are still vague.

"We haven’t seen the details of the financing agreement, there are a lot of open questions," he said. There are also additional legislative steps, and the resolution that passed in committee on Wednesday still needs approval from the full Board of Aldermen.

The biggest question, though, is whether MLS will actually grant St. Louis one of its two expansion slots for a team that wouldn't debut until the 2022 season. While previous comments by the league indicate St. Louis is a front-runner, it's still a waiting game.

It's a game that the ownership group says it can win.

"I believe that by the end of this calendar year, our application will put us above everybody else," Betz told the committee. "I just don’t think anybody can offer what we can offer.