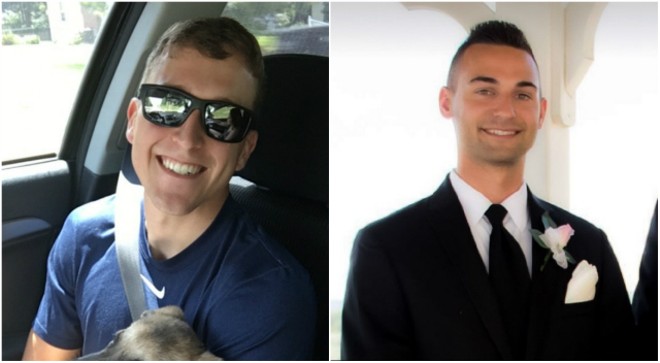 A police union wants St. Louis County to reinstate two cops who were fired after an internal investigation found they lied about their role in a fatal car chase.

Officers Alex Maloy and Mark Jakob "did their job" on the night of August 10, the St. Louis County Police Association said in a news release.

The two were riding together when they spotted a Hyundai Elantra run a red light on Airport Road in Ferguson, authorities say. County police originally said the officers didn't chase the car. (The department has a policy against pursuits for anything but serious crimes, and a traffic violation doesn't meet the standard.) But surveillance video later showed the car zip past with a police cruiser on its tail.

The sedan raced west into Berkeley where it crashed, killing the 49-year-old driver, Mikel Neil, and his 59-year-old passenger, Townsal Woolfolk.

In matching written reports, the officers claimed they flipped on their lights but the car quickly sped out of sight. They dropped the pursuit and only later learned about the deadly wreck, according to their reports.

But Chief Jon Belmar says the officers did not tell investigators the truth. He announced their firing the day after Thanksgiving, alleging the two gave "misleading" information to commanders on the scene and the Missouri State Highway Patrol, which investigated the crash.

Belmar is trying to "scapegoat" the officers to clean up an embarrassing situation and assuage activists, according to the union.

Woolfolk's son praised the firing of the two officers but told KSDK he still intends to sue the county over his father's death.

"Just waiting out for justice," Tony Woolfolk told the station.

You can read the full statements from Belmar and the union below. First are the chief's comments.


The St. Louis County Police Department has a reputation of a very professional police department which carries out its mission of Service and Protection in a responsible manner. Policing can be a very difficult job at times, and I am grateful to have officers that are professional, caring and approach their job with a very high degree of integrity. They are truly dedicated professionals.

It has been determined that on August 10, 2018; two of our officers were involved in a pursuit in the City of Berkeley. Information provided to commanders at the scene and the Highway Patrol by involved officers was misleading and complicated the investigation and our understanding of the circumstances of the actions those two officers took. Those details contradicted the later investigation, and caused this Department to launch an internal investigation into the action of these two officers. Through the examination of the Highway Patrol’s crash investigation, internal documentation, and video evidence, it was determined that the involved officers provided statements that were ultimately found to be misleading and actions by those two officers discredited themselves, and the image and reputation of this Department. Upon recommendation of the Bureau of Professional Standards, the two involved officers have been terminated from the St. Louis County Police Department.

The Department remains committed to holding our members accountable at the highest levels, while at the same time recognizing that this case and the two involved officers’ actions were not emblematic of the outstanding work our officers do every day.

And here is the St. Louis County Police Association's statement:

All of the evidence in this investigation fully supports both Police Officers’ actions on the evening of August 10, 2018, when two individuals lost their lives in a tragic vehicle crash after committing multiple dangerous and life threatening driving violations. Officers Maloy and Jakob have fully cooperated with investigators and been completely honest. Officers Maloy and Jakob have nothing to hide and did absolutely nothing wrong. They did their job. Chief Belmar’s assertion that Officers Maloy and Officer Jakob were dishonest during this investigation is spurious and misleading to the public. Nothing presented in the reports refutes any portion of any statement made by these two officers.

The only misleading statements in this investigation are the conclusions designed to further predetermined political appeasement. Community activists have repeatedly asserted that police chased and rammed the vehicle causing a fatal accident when the undisputed evidence reveals that the suspect vehicle successfully eluded police prior to the crash and these officers were completely unaware of the accident until subsequently notified.

The simple truth is that Chief Belmar made a poor decision based on embarrassment and political expediency designed to rehabilitate his image and tamp down growing political concerns about his ability to effectively lead the St. Louis County Police Department. The SLCPA will not tolerate Chief Belmar’s attempt to scapegoat these two dedicated and talented Police Officers and we will aggressively pursue every legal remedy available to clear both their personal and professional reputations.

Both Officers are proud of their St. Louis heritage and the fact that they were able to serve their community as police officers. Officers Maloy and Jakob are proudly supported by their families, friends, co-workers and, not surprisingly, several high ranking commanders within the St. Louis County Police Department who continue to actively question Chief Belmar’s true motives behind this terrible decision.