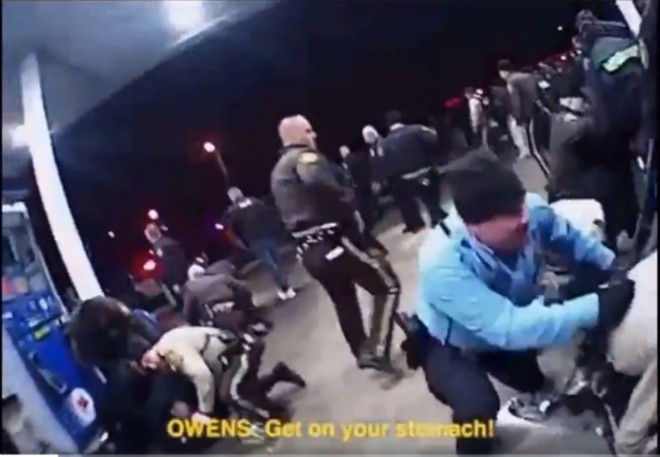 "I went through a whole can of mace," Officer Timothy Anderer tells another cop, who asked if he got in any "stick time" during the action. "I had a couple of little good kicks."

State Rep. Bruce Franks Jr., who was arrested that night outside a Mobil station in Berkeley, posted the video last night on social media. Franks is suing St. Louis County, Bel-Ridge police Officer Philip Von Der Heydt and St. Louis County police officers Anderer and Stephen Owens. He alleges they beat him with a baton, kicked him and maced him in the face even as he complied with their orders.

"As I continue to see police brutality locally and nationally, I wanted to share the unfiltered reality of these interactions, so I am releasing footage from the 2014 protest," Franks said in a prepared statement.

Several hours before Franks' arrest, a Berkeley police officer had fatally shot eighteen-year-old Antonio Martin, alleging the teen had pointed a gun at him outside the Mobil station. It was about four months after another black teen, Michael Brown, was killed by a white police officer less than four miles away in Ferguson.

Protesters soon filled the parking lot, and Franks says he and other members of a group called the Peacekeepers went to de-escalate tensions between demonstrators and the police. He was instead arrested when, he says, he bear hugged a fellow peacekeeper who was grabbed by police. Franks has long said police that night were out of control, and he says the video is proof. On Twitter, he writes, "It took them a while to get us the body cam footage. It’s about transparency and accountability."

The release of the 2014 Antonio Martin protest footage, is not to fuel tensions but to bridge gaps. This happened to me, but I’m not an anomaly. It took them a while to get us the body cam footage. It’s about transparency and accountability. pic.twitter.com/WM2OjlhuUy


The footage shows officers from multiple departments on top of Franks. One twists Franks' wrist and fingers behind his back.

In the lawsuit filed in 2016 by ArchCity Defenders, Franks says he was kicked and beaten. Another angle of the video is grainy but appears to show an officer in a blue municipal uniform swinging his arm down on Franks with a baton and a county officer swing his leg in, possibly kicking him.

Another clip, pulled from Anderer's body cam and filmed after the arrests, captures the officer and others joking about manhandling protesters. Anderer is standing away from the police line. He explains, "one of the fucking white bitches caught me spraying everybody, so she's on my ass. I'm hiding back here for a little bit."

St. Louis County police Officer David Steinmeyer is heard saying "I got a couple good licks in on somebody."

Apparently worried about the visibility of what had just happened, Anderer adds, "This is a terrible place to fight people. Look at all these fucking lights and everything else."

Steinmeyer pipes up with a story about "some guy was fucking kneeling down..."

It's hard to make out all of the second half of what he says, but captions in the video transcribe it as "I fucking kicked him like there was no fucking tomorrow."

St. Louis County police released a statement today in response to the video.

"We can confirm that some of our police officers were involved in the protest shown in the video from 4 years ago in December of 2014," the statement reads. "The protest turned violent, and subjects were taken into custody. Any use of force that occurred was documented and internal investigations were conducted as part of that review. We can not further comment on the actions taken by officers that night due to pending litigation."

A police spokesman confirmed the two county officers named in the suit remain on the force.

Franks' lawsuit is still working its way through federal court. He says Berkeley police refused to provide him with medical treatment when he was taken to the jail that night, despite injuries that included a concussion and torn rotator cuff.

Charges of assaulting a police officer and resisting arrest were eventually dropped, and Franks claims police only filed them to cover up their misconduct. He filed a complaint with the county police department, but it was dismissed as unfounded after an internal affairs investigation.

"My release of the Antonio Martin protest footage, is not to fuel tension between law enforcement and civilians, but to give insight into the experiences of communities who are disproportionately subjected to police brutality," Franks says. "Moreover, I hope this level of transparency will highlight, the need for reform."