The Loop Trolley Has Already Earned a Joy 99.1 FM Sticker 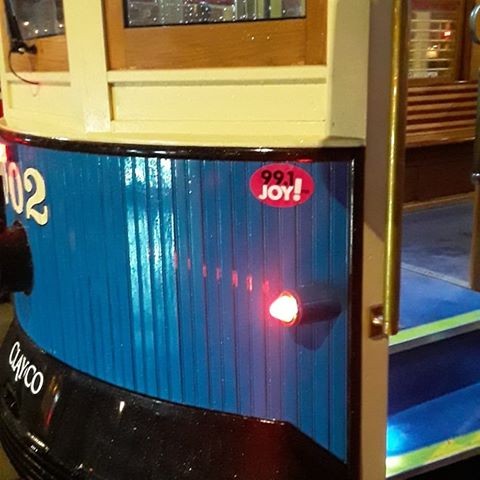 On Friday, days after a last-last-last minute delay by University City over permit issues, the Loop Trolley finally made its grand appearance on the tracks running through its namesake territory, trundling and clanking down the Delmar Loop and thus proving that any dream is possible with millions of dollars and no real deadlines.

In hindsight, it seems like we should have expected what happened next: That very night, someone slapped a Joy 99.1 FM sticker on Trolley 002's backside as it passed the Pageant.

While the stickers themselves originate with a local Christian radio station, their specific infamy is derived from a widespread (and not wholly unsupported) belief that a car bearing a Joy 99.1 FM sticker is sort of like a pirate ship flying its black flag, only instead of plundering ships it takes up two parking spots and merges like an asshole.

In a phone interview on Sunday, the rogue sticker-applicator told Riverfront Times that the trolley had fully demonstrated its eligibility for the sticker, arguing, "If anybody deserves a Joy sticker, it's going to be the Loop Trolley for hitting random cars."

The sticker perpetrator asked not to be named, though they did direct us to a video showing the moment they physically applied the sticker to the trolley's trailing end as it passed the concert venue on Friday. They also sent us a clip of the newly Joy'd trolley in motion.

On Friday, the Loop Trolley made its triumphant entrance on the Loop, where it was promptly slapped with a Joy 99.1 FM sticker, because of course https://t.co/Yw7tzep1ta pic.twitter.com/OYYcmugwGR


Granted, the Loop Trolley did hit two vehicles in its last weeks of testing — the second collision registering just two days before its official opening date. Still, despite the newly-narrowed margin of error for parking on the Loop, one could argue that the drivers who badly parked their rides were really at fault, and not the track-locked trolley.

Toward the end of the interview with the sticker vandal, they acknowledged that while the trolley deserved its joyful fate, the drivers of the vehicles it hit still hold some blame. "I guess they parked like shit," they said. "Technically, I should have put a Joy sticker on the cars too."