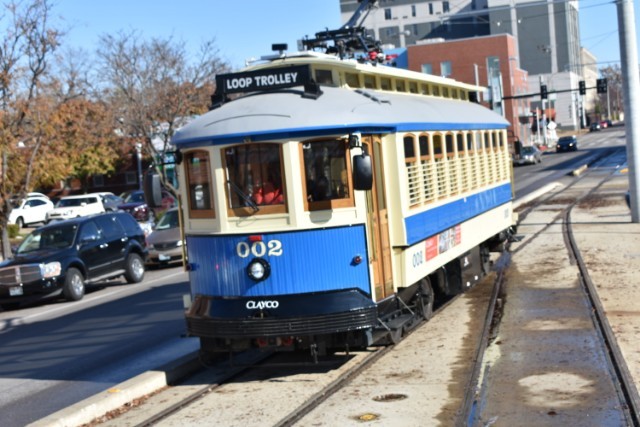 Nearly a week after it finally started ferrying passengers on the eastern portion of its line, the ever-delayed Loop Trolley still has yet to provide any rides within the Delmar Boulevard business district that serves as its namesake.

The hitch comes down to an ongoing kerfuffle between the Loop Trolley Co. and leadership in University City.

The St. Louis Business Journal reports that the Trolley Co. still has yet to acquire a conditional use permit to operate within University City limits. Gregory Rose, city manager for University City, tells the Business Journal that the trolley backers have several issues to address before the permit will be granted. At least one of them, relating to a trolley wire post near the University City Library, is explicitly regarded as a matter of safety.

"For me, it’s really a question of what our responsibilities are to the public and ensuring that we meet those obligations," he says. "I think that the representatives from the company understand that.”

The Business Journal included University City's punchlist of matters that must be attended to before the trolley can begin running on the western edge of its line. From its report:


-A $300,000 bond from the trolley operation which would help University City pay the costs of street rehabilitation should the trolley cease operations

-Adjusting a disabled access ramp for drainage at Ackert Walkway-Delmar

-Sealing a crack at the Leland westbound station disabled ramp

According to the St. Louis Post-Dispatch, the most hilariously ominous of those requirements — the $300,000 bond to cover the cost of ripping up the tracks if this whole thing (somehow!) tanks — has been agreed to by the Trolley Co., which held a meeting Monday afternoon to approve the expense. According to Rose, that money was first requested by the city council in 2013, then again in January 2017. Why that and the other requirements were not attended to prior to the trolley's grand opening is a mystery for which we may never receive an answer.

“We have never wavered,” Rose tells the Post-Dispatch.

No one answered the phone at the Loop Trolley Co. when we called seeking comment Wednesday afternoon, nor did they immediately return our call after we left a voicemail.

But Joe Edwards, the trolley's most prominent backer, tells the Post-Dispatch that the non-profit organization been working to fulfill U. City's requirements with the hope that it can start operating in the business district by Friday, in time for the start of the holiday shopping season. (If recent history serves as a guide, that estimate means we should expect to see the trolley running in the Loop by 2022 or so.)

“I would have loved to see it run the whole route right away,” Edwards says. “But on a major project, it’s trickier.”

Still, in spite of the seemingly never-ending roadblocks constantly being erected in the trolley's way — the years of delays, the millions of dollars, the multiple struck vehicles, the very will of God — Edwards is ever the optimist.

“When the public sees us up and running — the full route — I think they’ll see how beneficial it is for the St. Louis metropolitan area,” he says. “It’s going to be so worth it.”