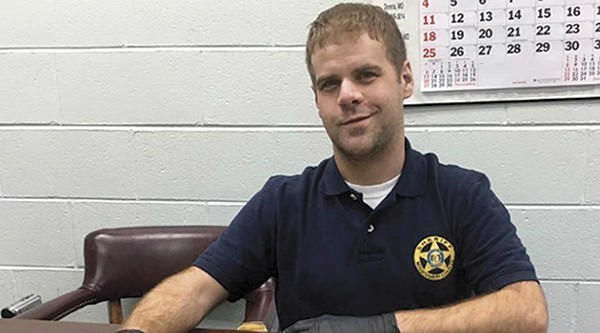 He will also resign from office as part of the plea.

The 35-year-old sheriff painted himself as a hardcore law enforcer, cracking down on drug dealers in the rural Bootheel county where he grew up. But there were soon complaints about his heavy-handed tactics, and rumors swirled about his questionable use of surveillance.

The former sheriff, whom Hutcheson defeated following an ugly election campaign, told the Riverfront Times in 2016 that the FBI had raided Hutcheson's office in 2014 and seized his computer and other electronics. The former sheriff says he learned at the time that Hutchseon, his one-time subordinate, had illegally traced his cell phone.

In March, prosecutors from the U.S. Attorney's Office filed identity theft charges against Hutcheson. The charges related to tracking of multiple cell phones.

But this morning's plea revealed that the illicit surveillance extended even further than previously believed. Between April 2014 and March 2017, the young lawman obtained hundreds of people's data, he now admits.

The scheme dates back to when Hutcheson was a jail supervisor for the sheriff's office. Prosecutors say he filed "thousands" of requests to a third-party information company for cell phone GPS information that told him the location of the phones.

Law enforcement call the practice "pinging," and it can be legal under certain circumstances. But Hutcheson submitted bogus legal paperwork that made it look like he legal authority for the searches when he didn't. Some of the people he tracked were state troopers.

Hutcheson is scheduled to be sentenced in February 2019 and faces a maximum of twenty years in prison and a $250,000 fine.

Hutcheson and the county have been sued multiple times following the deaths and mistreatment of prisons at the jail, including a $20 million suit filed earlier this month by the family of Tory Sanders, a mentally ill Tennessee man who died after he was allegedly manhandled by Hutcheson and his staff.

Attorney General Josh Hawley announced that state charges regarding the fraud and a civil lawsuit seeking to remove Hutcheson from office will be dropped as part of the plea agreement in the federal case.

Hawley had investigated Sanders' death, but announced in March that he would not file murder charges against the sheriff or others involved.

Editor's note: This story was updated after publication with additional information.