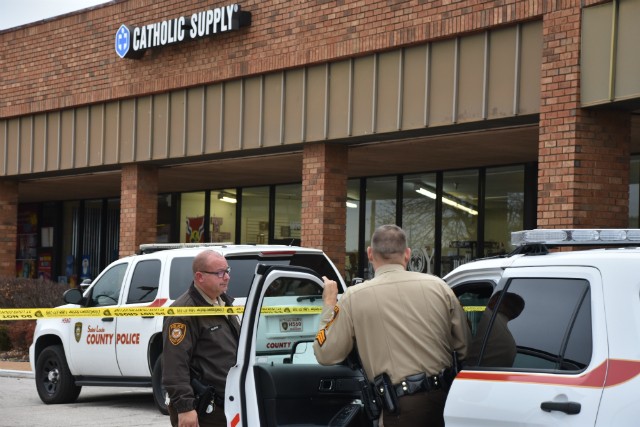 Update at 11:25 a.m.: The story has been updated with the name of the victim and more details about what the shooter was wearing.

St. Louis County Police have identified the woman killed yesterday at the Catholic Supply store as 53-year-old Jamie Schmidt of House Springs, Missouri. She was a customer at the shop.

Schmidt and others were inside the west county store about 3:20 p.m. when a gunman entered. He sexually assaulted at least one woman before shooting Schmidt in the head and fleeing.

Family sent us this photo of 53-year-old Jamie Schmidt. She was the victim of Monday’s tragic assault and shooting at a Catholic Supply Store. She was a mother of three and married her high school sweetheart. ⁦@ksdknews⁩ pic.twitter.com/s9kdceebU2


The store at 14069 Manchester Road remained blocked off by crime scene tape this morning, as the manhunt for the shooter continued.

County Police have now released an updated description of the shooter. He is 40 to 50 years old with a heavy build. He is between five foot seven and five foot nine, and he was wearing a navy blue Carhartt-style work jacket and plaid shirt that was red, white and black. He had on glasses and a brown belt with a red-and-blue square on the clasp.

Police have also sent out a photo of a gray "paperboy" style cap as an example of the type of hat he may have worn.

UPDATE: We have a bit more information regarding the #CatholicSupply store homicide: The suspect may have been wearing a black or gray 'paperboy-style' hat. See the example. Remember, no detail is too small to report. If you think you have info, call 636-529-8210. pic.twitter.com/aktoeiZ3VX


Catholic Supply, a family-owned chain, shut down all three of its locations through the metro area.

"We are shocked and saddened by the events that occurred at our West County location Monday afternoon," Dan Suttle, president of Catholic Supply, said in a statement. "This was a senseless tragedy. Please join us as we pray for the victims and their families."

All three stores will be closed today but will reopen on Wednesday with extra security, Suttle said.

"The safety and security of our employees and customers is our highest priority," he added.

The attack stunned people in the area, particularly Catholics, for whom the store is a regular stop for Baptism gifts and holiday decorations.

"Our hearts go out to the victims of this horrific tragedy at Catholic Supply," Archbishop Robert Carlson said in prepared statement, urging people to come forward with any information.

The store sits in a strip mall just east of Highway 141 along a busy strip of Manchester. The majority of other businesses in the shopping complex were still closed this morning.

Editor's note: We have continued to update this post as new information comes in.