After something like 100 years of delays and millions upon millions of dollars' worth of sunk costs, the infamous Loop Trolley defied the very will of God this past Friday and finally lurched to life, ferrying its first riders on the tracks down Delmar Boulevard.

Eager would-be passengers, including an RFT reporter and a co-conspirator, took to the trolley platforms in the Loop around noon — the scheduled start time of service after Thursday's grand opening got snowed out — and began purchasing tickets.

It should be noted that a disproportionate number of those waiting were media types. Joining us at the trolley stop in front of the Pageant were three Post-Dispatch employees — and literally no one else. Some curious passers-by asked the assembled group what was going on, but none seemed interested in actually going for a ride. 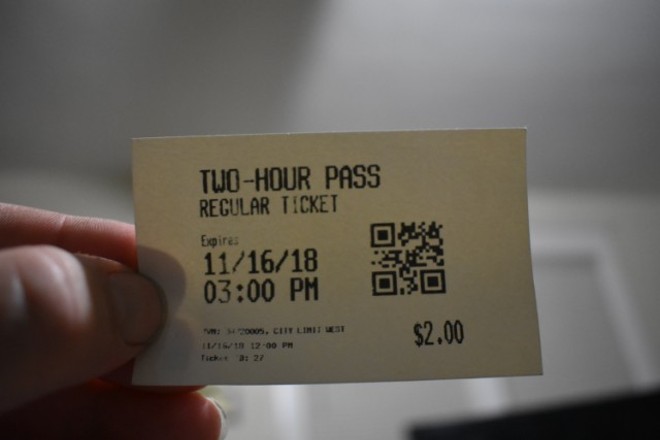 In keeping with that theme, we present you with ten observations we had after finally riding the Loop Trolley — all your questions answered, so you never have to actually ride it yourself.

1. For Now, at Least, It's More Like the East Delmar Trolley

After we stood around in the cold for some 50 minutes waiting for a ride, the Loop Trolley Co. took to Facebook and announced that the trolley would only be in operation from the Delmar Loop MetroLink station, east of the Pageant, to the Missouri History Museum MetroLink station. More eagle-eyed readers might note that this is exactly the portion of the trolley line that is already serviced by the MetroLink, and also that it does not include any of the portion of the line that most would call the Loop. Semantics!

Our trolley operator, a man named Anthony Edwards, did not have an explanation for why the western half of the line was not in service. His guess was that they might be setting up Christmas decorations on the Loop side (though we did not spot any). As it turns out, the truth was in the St. Louis Post-Dispatch: University City was barring the trolley from running within its borders until it cleared up a few items on a punchlist, including one it felt was "critical" to safety. Apparently operators have known about these issues for two years. No idea why they didn't clear them up during the two years that tracks sat idle.

The trolley can reach a top speed of 25 miles an hour, backer Joe Edwards has said, though it typically travels at an average of ten to fifteen. At one point in time we spotted a man on a Bird scooter outpacing us on the sidewalk. 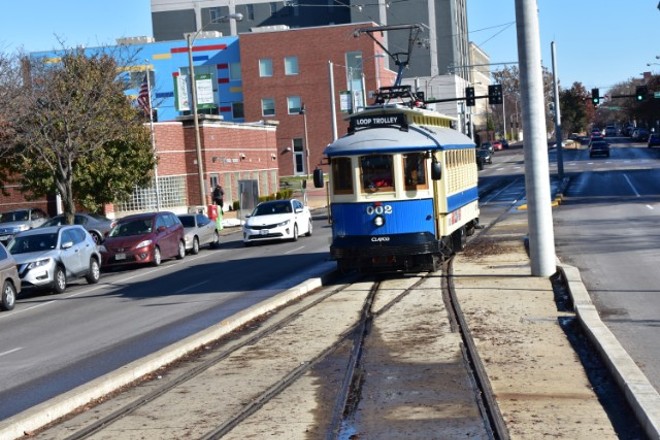 3. Be Prepared for Unscheduled Stops

The trolley itself does not actually turn around when it reaches the end of the line, it simply reverses direction. The trams are designed to be operated this way, with the operator moving from one end of the trolley to the other when it is time to head the other way. This means, though, that sometimes both of the two trolleys are in operation are on the same tracks at the same time. They get around one another at certain spots where the tracks split briefly into two sets, with one of the trolleys pulling over and waiting on the second set of tracks as the other passes by on the first.

However, on occasion, this means that you must sit and wait for the other trolley to come and pass. It took twenty minutes to make it from the Delmar Metrolink stop to the History Museum — a distance of 1.3 miles. Interestingly, though, it only took nine minutes to get back.

4. The Interior Is Actually Pretty Cool

The trolleys are really pretty on the inside, with polished wood benches and leather straps to hang on to and the whole nine ... though it does seem they are maybe a little ambitious about the number of riders on an average weekday. We counted 28 straps, six small benches capable of holding one person each comfortably or two uncomfortably, and seven large benches that could hold three to four people each. That puts the conservative estimate at 55 passengers at a time. During our run, there were never more than six people riding, but once the trolley is fully operational on a nice spring day? The extra space could come in handy. 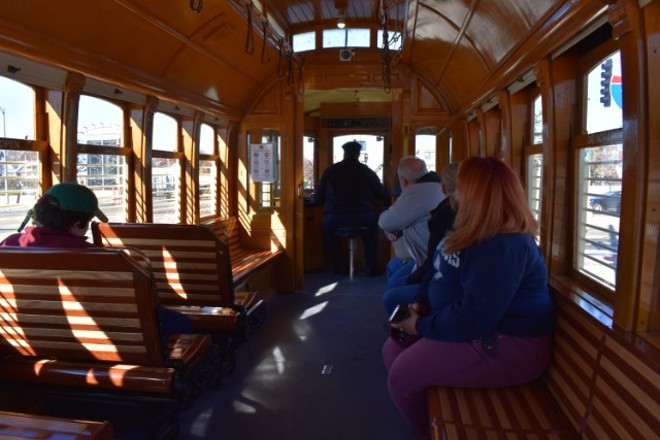 5. The Benches Are Also Reversible

The trolleys' reversibility extends to the furnishings. Unlike MetroLink, on which you sometimes travel facing backwards in your seat, the small forward-facing benches on the trolley have a switch on the side that allows you to move the backrest of the seat to the opposite side. Whenever the trolley reaches the end of the ride, the trolley operator walks down the row and switches the direction all the benches face before taking his spot at the other end.

6. It's Got a Cool Clanging Bell Sound and a Loud-ass Horn

We didn't see an actual bell, but the trolleys do make a pleasant clanging noise as they go down the track. The horn, on the other hands, seems better suited for a barge in the Mississippi, and the operator blasts it every time he passes through an intersection. It is surely for safety, but it is also very, very loud, which is cool as hell.

The most excited people we met while riding on the trolley were two separate pairs of older folks, who were just blown away by the beauty and whimsy of it all. Both pairs, who weren't riding the trolley at the same time, requested that another passenger take a photo of them during their trip. Adorable.

8. Would-Be Passengers Who Waited on the Loop Side Are Not Stoked

When we disembarked after traveling to the History Museum and back, three people got on — and immediately started complaining to the trolley operator about the lack of service at the other end of the tracks. The operator responded by telling them he could give them the number for customer service, but one of the men said that he and many other people he had been waiting with only got voicemail when they'd called. Seems like somebody should have been manning the phones on day one, don't ya think? 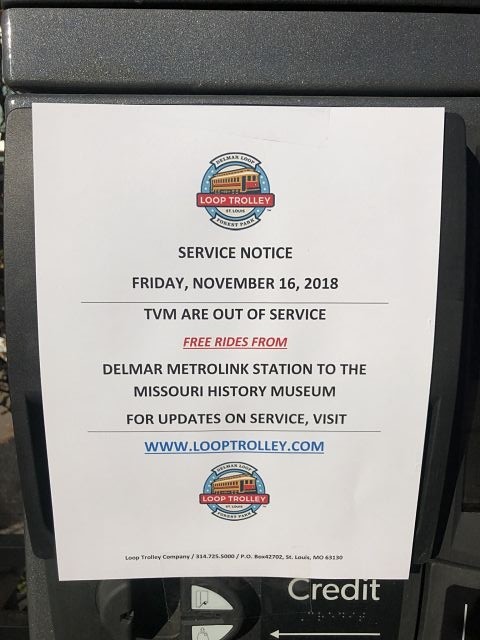 Trolley backers surely would have loved to see packed trams and long lines on the first day of business, but that was not our experience on the first day. During our ride to the History Museum around 1 p.m. there were five passengers total, and no one whatsoever hopped on at any of the stops until we reached the History Museum itself. At that point three people stepped off and four stepped on. On the way back it was somewhat of a repeat experience — no one got on at any of the stops until we hit the end of the line at the Delmar Loop MetroLink again.

Interestingly, while we paid for our ticket, the Trolley Co. later announced the day's rides were free. It was unclear if that affected ridership in any way.

10. It's Far Too Soon to Tell Whether This Thing Will Be Successful

With the more populated section of the trolley line — the Loop itself — not running, it is impossible to predict whether this very expensive gamble will pay off in the long run. It seems crazy for the Loop Trolley Co. to declare the trolley open for business when half of the line isn't running, but almost every single element of this project has seemed crazy to us, so it's in keeping with what we've come to expect.

Time will tell if Joe Edwards finally bit off more than he can chew on this one, or if he will finally silence the haters once and for all. Meanwhile, you know we'll be here for every twist and turn.