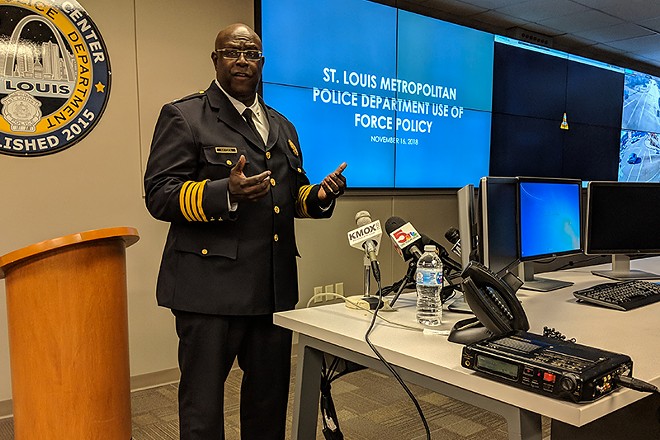 Today, in an uncommon move, the St. Louis Metropolitan Police Department held a press conference to release video footage from two separate police shootings, including a September 26 confrontation that ended with a plainclothes officer shooting and critically injuring an armed teenager in north city.

In that incident, which took place near the intersection of Union Boulevard and Wabada Avenue, officers with the department's Gang Intervention Unit were driving an unmarked car nearby when they received a 911 call about a group of youths involved in a disturbance.

"The call was about a fight," Police Chief John Hayden said during the afternoon press conference, which was held inside the department's screen-filled Real Time Crime Center within its Downtown West headquarters.

As Hayden narrated, a projection screen showed surveillance footage that appeared to have been shot from across the street. Hayden declined to specify the exact source of the footage.


After the first 911 call, Hayden said, two more calls followed — also reporting the fight. One caller added another detail: An individual was brandishing a pistol at a crowd of teens further down sidewalk.

As the unmarked car approached the intersection, the officers spotted the fight and the armed subject, "who was still pointing a weapon at the crowd," Hayden said.

The chief continued: "The passenger officer got out of the car first, he identified himself as an officer, he asked the subject to drop the weapon. The subject did not drop the weapon and began to turn to the officer, at which time he fired shots at that subject."

The video shows a somewhat obstructed view of the shooting. At the 46-second mark, the video pauses to show the subject crossing the street and appearing to point a pistol toward the unseen group of teens, who are located off-screen.

Around the one-minute mark, an unmarked sedan stops in the intersection. On the video, the armed subject — identified by the St. Louis Post-Dispatch as fifteen-year-old Branden Leachman — is blocked from the camera by a clothing donations kiosk.

At that point, an officer can be seen getting out of the sedan and moving toward the kiosk. Then Leachman returns into view. The teen moves around the kiosk and appears to try to start running. But he only gets a couple steps before toppling to the sidewalk.

Leachman was initially reported as being in critical condition following the shooting, and the teen's aunt told the Post-Dispatch that he had been struck four times, in the thigh, back, right shoulder and the back of the head.

The department itself has not identified Leachman, a minor, as the armed subject in the videos. During the Friday press conference, Hayden only said that the subject had been released from the hospital and that the case is being reviewed by the city's juvenile court system.

Hayden also clarified one of his previous statements, made hours after the shooting in September. At the time, he had told reporters the plainclothes officer "would have been was wearing" a vest that said "police" during shooting. "That was not the case," Hayden acknowledged.

However, Hayden declined to discuss his impressions of the shooting itself. When asked about the actual policework demonstrated in the videos, he said those issues were the province of an ongoing investigation by the department's Force Investigative Unit.

Hayden said that the store's management had called 911 about a suspicious person who had previously used a stolen credit card and then returned.

The video of this police shooting — which starts at the two-minute mark in the above clip — shows two officers entering the store and locating their subject in an aisle. The surveillance angle changes to show one officer exiting the store to run a computer check, and then cuts back to the second officer as she attempts to detain the subject, who is wearing a Cardinals jersey.

"The subject breaks for the door," Hayden told the assembled reporters as the footage rolled behind him. The video shows the the subject and two officers fall to the ground.

"During that struggle," Hayden continued, "they see a pistol on the subject's side, and immediately the struggle begins over the pistol."

In those seconds on the ground, one of the officers appears to be wrapped around the subject's fiercely kicking legs, while the other digs at the subject's waistband area. It was the second officer who drew a pistol of their own and fired a single shot into the subject's chest.

The subject, who has not been identified by police, was conveyed to a hospital and later released into the custody of the St. Louis County Police Department in connection with a robbery investigation. The pistol on the subject's hip was later determined to be a realistic-looking pellet gun.

For his part, Hayden explained that he'd decided to release the videos "in the interest of transparency," and added that he had waited until the department's Force Investigative Unit had gotten a chance to review the material before providing the footage to the press.

"I can't really speak to what previous chiefs have done," Hayden added, "The best practices across the county is to release the video as soon as is reasonable."