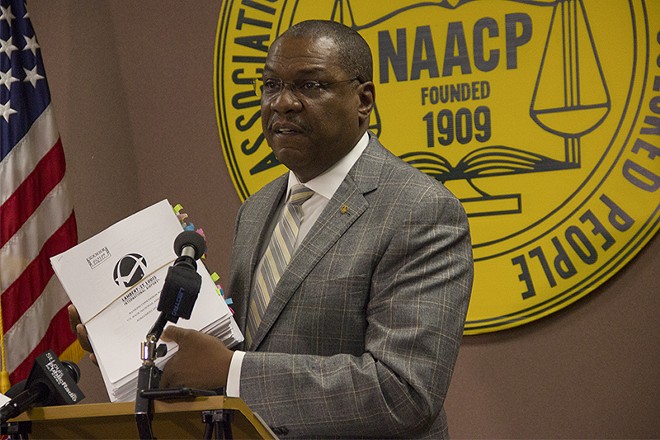 Who governs complaints of racial bias at St. Louis Lambert International Airport? Is it the city of St. Louis, which owns the airport? Or St. Louis County, within whose borders the airport is located?

The answer to that question, says St. Louis NAACP president Adolphus Pruitt, amounts to a "civil rights crisis" at the airport. At a press conference yesterday, he offered up a stack of records to make his case that the city is willfully dodging its responsibilities at the airport it owns and manages.

The thick stack of documents brandished by Pruitt entail the contracts that govern airport "concessionaires," or non-airline employers — which include restaurants, shoeshine stations and the companies that employ aides to push travelers needing wheelchairs.

Several sections of the contracts explicitly designate St. Louis city's Civil Rights Enforcement Agency, or CREA, as the agency responsible for stepping in when when an airport employer fails to uphold the city's non-discrimination laws. One section says employers must provide records to the agency; another flatly states that if an employer is "unable to conform" with the city's employment protections, the employer must notify CREA within ten days and devise a plan to resolve the issue.

Yet on July 3, the NAACP received a letter from CREA denying that it had any jurisdiction over a different airport contractor: Southwest Airlines. In the letter, the agency's director, Charles Bryson, wrote that the city could not assist the NAACP with its allegations that Southwest Airlines discriminates against African American employees.

Bryson's stated reason? CREA "does not have jurisdiction in the matter as the location of the alleged incidents are in St. Louis County." (Emphasis added.)

That line struck Pruitt as strange. CREA is supposed to be the city's enforcement arm for civil rights. Yet due to the airport's physical location, CREA appeared to be washing its hands of every employee at the airport. To Pruitt, that includes not just those working for Southwest, but even those employed under the "concessionaire" contracts like the one Pruitt displayed during Tuesday's press conference.

"[CREA's] ability to enforce civil rights for all of the folks who are employed under these contracts, in our estimation, may be null and void," Pruitt said. "To us, that is a civil rights crisis."

At least half of the airport's employees are working under the "concessionaire" contracts, Pruitt says. He voiced concern that workers with complaints about discrimination may believe that they can turn to the city for help — even though, through the Southwest dispute, the city seems to be saying those workers are not its problem.

Pruitt acknowledges that those workers could file formal employment complaints with state or federal agencies, but those agencies are backlogged and slow, he says.

And what of St. Louis County? Pruitt dismisses that option.

"We disagree that it’s a county problem. We did not reach out to the county," Pruitt says. He adds, "I want to see one instance where the county has told the airport what it can or can’t do. The city owns it, the city operates it."

Via email, Koran Addo, a spokesman for Mayor Lyda Krewson, did not directly respond to questions about CREA's relationship to airport workers. He did suggest that CREA's limitations don't mean the city is walking away from civil rights abuses.

"The City takes any allegation of discrimination seriously. We expect any contractor, vendor or other entity doing business with the City to act lawfully," Addo wrote in an email.

Addo added, "At the present time, we are not aware of any outstanding complaints made by any employee of Southwest Airlines."

Which gets us back to Southwest. Behind the "civil rights crisis" alleged at yesterday's press conference is the NAACP's attempts to obtain internal records of Southwest's hiring, firing and disciplinary practices. So far, the organization has been unsuccessful in getting those records.

In August, Pruitt staged a press conference to complain that the NAACP had documented numerous racial-related complaints against the airline, but the company refused to provide the records that, the NAACP contends, could demonstrate the extent of the problems.

Southwest maintains its own contract with the city. Pruitt concedes that — unlike the concessionaire contracts — the airline's contract does not designate CREA as the agency enforcing non-discrimination laws.

Still, between Southwest's refusal to disclose records, and CREA's contention that it can't touch St. Louis County, Pruitt says he worries about the workers caught in the middle.

"It is our intent to inform the public about it," Pruitt explains, "and to make sure the workers understand that we’re deeply concerned about it."