They Requested the St. Louis Police Budget. It Took 8 Months to Get It 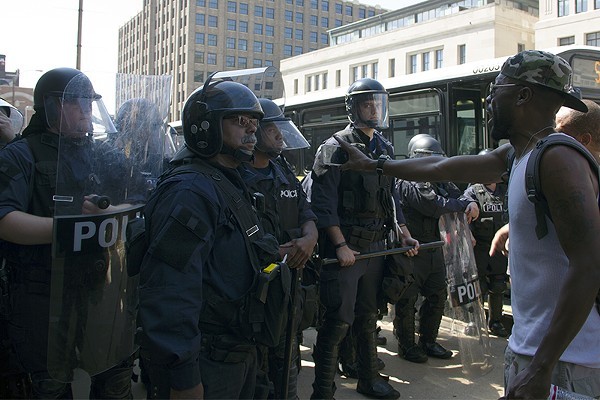 Way way way back in February, Phillip Weeks put in a Sunshine law request for the St. Louis Metropolitan Police Department's budget proposal. Not the limited big-picture information released online, but the real nuts and bolts that show what the department hopes to buy, and for how much.

Weeks is the co-founder of a grassroots organization, GRAM, focused on accountability and transparency. He knew from past Sunshine requests that the department had in the past submitted its budget requests at that time of year. He'd hoped to get the 2018 one in time to influence discussion of its approval before the new fiscal year began in July.

No such luck. Weeks didn't get his records until October 12.

By then the budget had been approved, and was actively being spent. Had been for months. The chance to take part in debate? In the past.

Adding insult to injury, the department had charged Weeks $180.54 to complete the request all the way back in March. "Who pays $180 and then waits six months to get the service they've paid for?" Weeks asks, incredulous. "What if the dentist operated like that?"

That eight-month delay isn't necessarily a violation of the law, says David Roland, co-founder of the Freedom Institute, a Missouri non-profit that has sued government entities including the St. Louis Metropolitan Police Department for failing to turn over public records.

The state's Sunshine law holds that government entities are supposed to respond to requests within three days, Roland says — with the implication that the requester gets the records in that time frame. But in reality, virtually no one gets records in three days. The records coordinator almost always responds to say the request has been received ... and then immediately says they'll need more time. That is, in fact, legal.

But while waiting for months on end after that to fulfill a request isn't necessarily unlawful, it certainly doesn't increase faith in the department's transparency. "Generally speaking, I'd say it's dispiriting that a simple records request could take six to eight months to fulfill," Roland says.

A spokeswoman for the police department tells the RFT that the delay was simply a matter of logistics: "This request required the input of multiple respective departments, which caused the delay in the response."

That's hardly a consolation to Weeks, nor is it news. The police department had already told him in June that they couldn't turn over anything just yet because it "has been determined that department-wide Commander review of this record is required and will need to be finalized for review by the Assistant Chief's Office."

In execution, that meant not just delay, but actual concealment. Each commander got an opportunity to make redactions (although the department's Sunshine law coordinator helpfully noted in an email to Weeks, "You will not be charged for the review and redaction time of the corresponding Commanders and departments").

In total, Weeks says, the department ended up redacting sixteen percent of the line items on the budget — 193 different lines blocked from public view. All those blackouts left GRAM with information that, in the words of co-founder Nicole Warrington, "is still a little opaque."

Since getting the information three weeks ago, GRAM is giving it a careful look, and finding some interesting tidbits. Still, for Weeks, it's a missed opportunity. He spoke at the Board of Estimate and Apportionment in April, the only public testimony before the board turns over the budget to the Board of Aldermen for approval. He could only speak with a certain level of knowledge because, at that point, he didn't have the records.

His remarks, in retrospect, were both prescient and a bit naive.

"In a democracy," he told the board, "people have to have the right to see what you're actually funding and where it's going. I'm still waiting on the police budget for 2019. I've paid for it, and I don't know if I'll get it before your session ends. I hope so. Maybe you can rush it through."

That didn't happen, obviously. Six more months passed before he got even the redacted set of records he has today.

But Weeks still hopes he can get the city to pay attention to the issues he was trying to raise in April — namely, alternative programs that the city could invest in to reduce violence rather than just police it after the fact.

"We wanted to use this to say, 'Look at how you're spending money. Isn't there an alternative way?'" he says. "If we could get this information on time and get the real information, not just redactions, the people who elect the mayor and the aldermen could say, 'This is not how we want our government to be. This is not what we want to spend our money on.'"

Now that Weeks has the records, he intends to hone that argument. And while he'll almost certainly be back with another Sunshine law request come February, the police department shouldn't be surprised to see him use its 2018 data to make his case. He waited this long for it; surely, there ought to be a payoff.