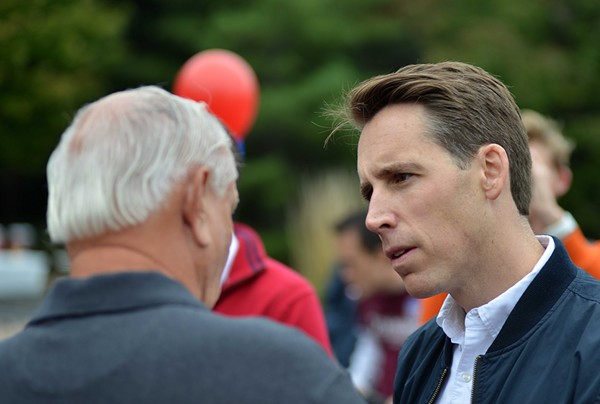 We think Missouri Attorney General Josh Hawley left early from his Cape Girardeau rally with Donald Trump last night. Why do we think that? Because Donald Trump said that he didn’t.

Now, we’re not sure why the GOP's Great White Hope would’ve left his own rally early or what it could mean, but we do know that Donald Trump is desperate for you to think that he did not.

There is a rumor, put out by the Democrats, that Josh Hawley of Missouri left the Arena last night early. It is Fake News. He met me at the plane when I arrived, spoke at the great Rally, & stayed to the very end. In fact, I said goodbye to him and left before he did. Deception!


First of all, in case you were wondering: No, Hawley's whereabouts weren't any kind of big news before Trump tweeted about them. Rumors weren’t swirling that Hawley left early or why he might’ve left early. Thousands of people weren’t all just standing around gossiping about where he was when the rally coverage finally wrapped on C-SPAN.

So why would Trump think this? Oh, right, because he saw it on Fox News, his sole source of information:

Looks like @briankilmeade put this out today on Fox & Friends at around 6:06 a.m.: "Why Josh Hawley didn't stay last night for the Missouri rally is beyond me. What could he have been doing that was so important?" https://t.co/05lk6b6zXM


It would’ve been reasonable, even, for Hawley to want get out of there early to haul ass to some other location. Trump does tend to blather on. Maybe Hawley was desperate to squeeze in some gym time. Or maybe he was just trying to get back home to Columbia so he could train more of his people to steal Democratic flyers and replace them with his own?

But Trump’s tweet just makes the whole thing seem so much more suspicious.
He seems super worried that you’ll think that Josh Hawley doesn’t like him.

(Which is insane, really, since Hawley is one of Trump’s biggest cheerleaders. Hawley's team even sent out an email blaming this latest non-rumor on "desperate Senator McCaskill and her team." Oh yes, you're a very good puppy, Joshy. You get a special treat now.)

We can't help but think that Trump wants to be close with Hawley. Like, really close. Like family. We think that Trump maybe wants Hawley to be the Jared Kushner he never had (Look at their hair! Twinsies!). It’s not like Trump can leave his swindled empire to one of his dumb sons. They'll probably be in prison, anyway. He needs another younger man to run the hellscape that is Future America after he finally, mercifully, goes swimming in the Lake of Fire for all eternity. Why not pick one who actually got into his Ivy League school on the merits?

But maybe something else has gotten under Trump's thin, orange skin. Judging by the furious pace at which he is retweeting himself this morning, it seems like he's worried about that rumored blue wave.

Which reminds us, did you vote yet today? Did you know that your employer has to give you three paid hours off of work today to vote? Or that there are all kinds of deals and discounts and free options for getting a ride to the polls? You have no excuse, really... unless you’re Josh Hawley and you have something better to do.

2:30 on a work day and Josh Hawley is 30 miles from Jeff City buying wine #mosen pic.twitter.com/iMxdJVuZz0