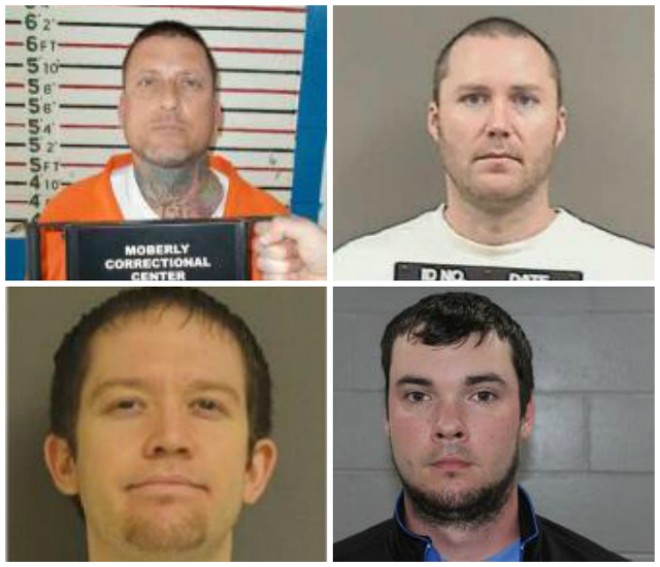 Four men from the St. Louis suburbs and rural parts of state carried out a brutal assault in the service of a white supremacist prison gang, federal authorities say.

The men are alleged to be members of the Aryan Circle, a criminal organization that began in Texas prisons and has spread to Missouri, according to an indictment unsealed on Thursday.

The four were identified as Thomas Wilson, 43, of Villa Ridge; Daniel Jerome, 31, of Wentzville; Thomas Tisher, 34, of St. Louis County and Dustin Haney, 28, of Hermann.

They're accused of attacking a victim, identified as "C.B." in court papers, on November 9, 2013 at the behest of the Aryan Circle. Federal authorities say C.B. suffered "serious bodily injuries" during the assault, and the men were armed with a gun at the time.

“These four defendants are alleged to have brutally assaulted their victim in order to establish or maintain their own status in the Aryan Circle gang,” said Assistant Attorney General Brian Benczkowski. “Gangs like the Aryan Circle threaten the safety and security of all Americans, and the Criminal Division will target and aggressively prosecute any individual who commits acts of violence on behalf of a gang.”

To that end, the Attorney General and U.S. Attorney in Missouri's Eastern District are prosecuting the four under federal racketeering laws, tying them back to the larger criminal organization of the gang. Prosecutors trace the history of the gang to the mid 1980s. It was formed by ex-members and rivals of the Aryan Brotherhood of Texas. In more than three decades since, the gang has grown and spread across the country thanks to its embrace of violence, authorities say.

It now has concentrations in Texas, Oklahoma, Louisiana, Indiana and Missouri. Primarily a prison gang, it has also spread to the outside, what members call the "free world" with members reporting to a government-like structure, complete with boards a various levels, organized by state and correctional facility.

Wilson, Jerome and Tisher have all done time in Missouri prisons. Wilson in particular has a long criminal history, stretching back two decades. All the defendants, except for Jerome were in custody on Thursday, according to court records.