The Loop Trolley, that wholly unnecessary transportation boondoggle embarked upon to satiate the nostalgic whims of a man who wears Hawaiian shirts and formal shorts year-round, hasn't yet opened to the public — but it has already run right smack into a parked car.

The St. Louis Metropolitan Police Department tells RFT that it received a call about an accident involving a white van and the trolley, which is currently in the "testing" phase, at approximately 12:45 p.m in the 6100 block of Delmar Boulevard yesterday.

That timing coincides neatly with a photo posted on the St. Louis page of Reddit by a user named "brentmj" close to 1 p.m. Tuesday that shows that the trolley clipped the side mirror of a white van:

"Traffic returned to normal after a 45-minute delay," brentmj wrote.

The incident was not only extremely predictable, given the fact that Murphy's Law is in effect in regards to everything Loop Trolley, it was also extremely predicted by your old pals here at RFT.

Back in March 2016, when the Loop Trolley was only abysmally behind schedule and not yet farcically so, we published an article positing that the space between the trolley tracks and the street parking on the stretch of Delmar east of Skinker — precisely where the accident took place — may be too close for comfort.

The lede from that one:


How close are the trolley tracks to the street parking along the south side of Delmar Boulevard, east of Skinker? So close that it's easy to imagine a trolley car shearing off a rearview mirror.

At the time of our story, Loop Trolley Transportation Development District officials said they were aware of the potential for problems.

"We knew it was going to be tight down there," Chris Poehler, the organization's director, said at the time. "We need to get the final dimensions for the trolley cars to see how tight." 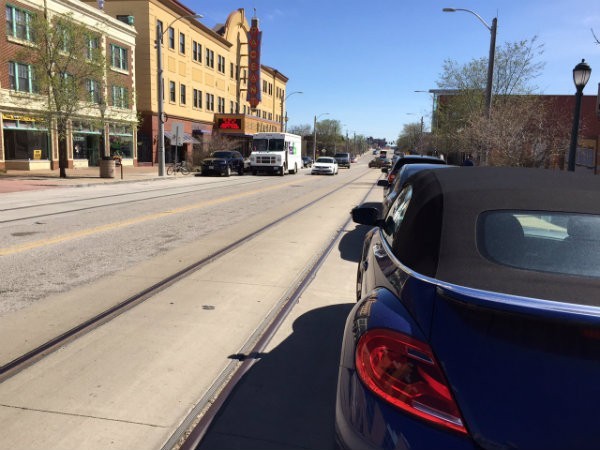 It should come as a surprise to absolutely no one who has been following the odyssey of ineptitude that is the Loop Trolley that they figured out a way to fuck that one up too, even with years of notice.

Time will tell what solutions may come to pass (maybe they'll just ban cars from the Loop like they tried to do with bicycles?). But if we may be afforded another prediction, we'd reckon they'll probably just mark that section of the street parking "compact only" and call it a day.

We've got a better plan though: Is it too late to just say "fuck this trolley shit?" You gotta know when to cut your losses, people. We are deep, deep into "fallacy of sunk costs" territory here.

The Loop Trolley Company did not respond to requests for comment both yesterday and today — which is odd, because it really doesn't seem like they're busy doing much else.