Josh Hawley Is Too Busy Campaigning to Do His Job, Complaint Alleges 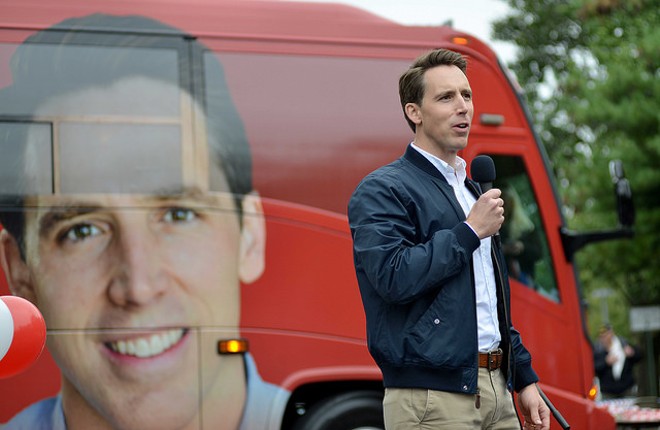 Earlier this year, Attorney General Josh Hawley drew criticism for his penchant for mid-morning workouts far from his office in Jefferson City. But these days, a complaint filed with the state alleges, Hawley has been skipping out on office hours not to pump iron, but to pump up his campaign against Senator Claire McCaskill (D-Missouri).

American Democracy Legal Fund, a D.C.-based nonprofit organization founded by left-wing activist David Brock, filed a formal complaint with state Auditor Nicole Galloway earlier this month. It notes that Missouri law requires the state attorney general to "devote his full time to the office." Yet, the fund notes, in August alone Hawley attended at least fifteen campaign events during the work week, many far from his office in Jefferson City. It documents numerous other weekday events in May, June and July.

And while Hawley has insisted he's working remotely, a McClatchy story published Monday suggests that may be harder for him than the average joe: Hawley doesn't use email.

The complaint asks Galloway to look into Hawley "for failing to meet his obligations as a full-time attorney general and instead devoting excessive and inappropriate amounts of time to his partisan political campaign for U.S. Senate."

Gail Gitcho, an adviser to the Hawley campaign, responded to the complaint by saying, "This is an embarrassing and desperate attempt by this hyper-liberal group to prop up their failed candidate Claire McCaskill two weeks before the election." In a statement, Mary Compton, a spokeswoman with Hawley's office, also called the complaint "meritless."

Interestingly, the complaint notes that Hawley's official calendar, which was kept largely empty during his first year in office, has shown even fewer publicly listed events in the past year as he began to campaign in earnest.

In 2017, the complaint notes, the official calendar showed just 4.85 hours of office business in response to a Sunshine law request filed by the American Democracy Legal Fund. In the first seven months of 2018, that dropped to an average of just three hours a week.

"There were 146 business days in the first seven months of 2018 (excluding weekends and holidays); on 96 of those days, AG Hawley's official calendar did not show him doing any work on behalf of the state at all," the complaint states.

Now, it's worth noting that Hawley keeps his office calendar largely secret, so one should not surmise that the lack of publicly listed tasks means tasks are not being done.

So, yeah. You can argue that much of what Hawley does is subject to attorney-client privilege, and so he doesn't write down his schedule in any Sunshine-accessible way. Or you can argue that he's trying to evade the state's Sunshine laws (probably depends on what party you're in). You could also argue that Hawley's office is a mess because he's a bad manager distracted by his ambition or that the New York Times is out to get him. Again, depends on your party. But either way, Hawley has left few tracks suggesting he's hard at work rather than making campaign tour stops in his utility trailer.

For the record, we asked both his campaign and his office how many hours a week Hawley has been devoting to his day job, which pays $116,437 annually. Neither responded to that query by press time. Hawley himself talked around the question when it was posed by a Springfield TV station earlier this week, stressing instead how aggressive he's been as attorney general.

A spokeswoman for American Democracy Legal Fund said it had yet to receive a response from Galloway.