Give Us This Day Tracks East St. Louis Cops, Residents During Year of Violence 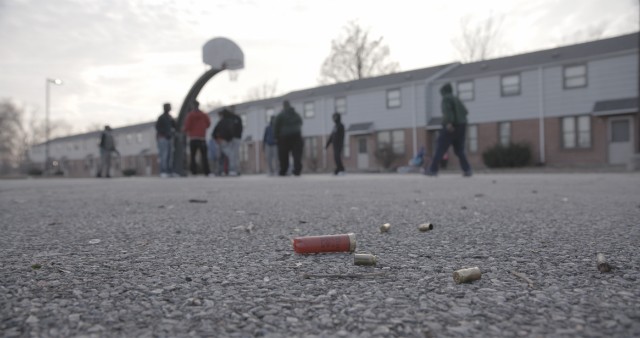 In the opening of a new documentary on East St. Louis, 24-year-old James Samuel drives through the streets explaining the darkness of his hometown.

"This city is just wicked as fuck," he says. "It's so wicked it's made me wicked."

Samuel is one of six people profiled in Give Us This Day. Filmmakers followed three residents and three cops during 2017 as the city dealt with a record-breaking year for homicides. The resulting 120-minute documentary, set to air on television in two weeks, is billed as "stories from America's murder capital."

Along with Samuel, an expectant father who sells drugs with a pistol in his waistband, the film focuses on a twelve-year-old who dreams of being a police officer one day and a high school gang member who hopes to escape East St. Louis on a baseball scholarship.

The cops include then-police Chief Michael Hubbard, a mother of four who joined the force at age 45 and a graying Sam Elliott type wizened by regrets from his days as a heavy-handed gang unit officer with the Los Angeles Police Department.

The film was written and directed by brothers Michael and Jeff Zimbalist, whose past subjects have included legends of California surf culture and drug kingpin Pablo Escobar's influence on Colombian soccer. Actor Vince Vaughn served as the film's executive producer.

Spiked with 911 dispatch calls and bloody crime scenes, the film captures the moments when East St. Louis gets the guns out, but the intersecting story lines also lace through high school prom, intimate family conversations and church services.

The cameras get some pretty stunning access, and while the picture of a city that shaped giants such as Miles Davis and Jackie Joyner-Kersee is bleak, viewers at least get a more nuanced view inside the day-to-day struggle.

Give Us This Day premieres at 9 p.m. November 8 on the AT&T Audience Network (DIRECTV Channel 239), DIRECTV NOW and Watch TV.

Until then, you can see the trailer below.