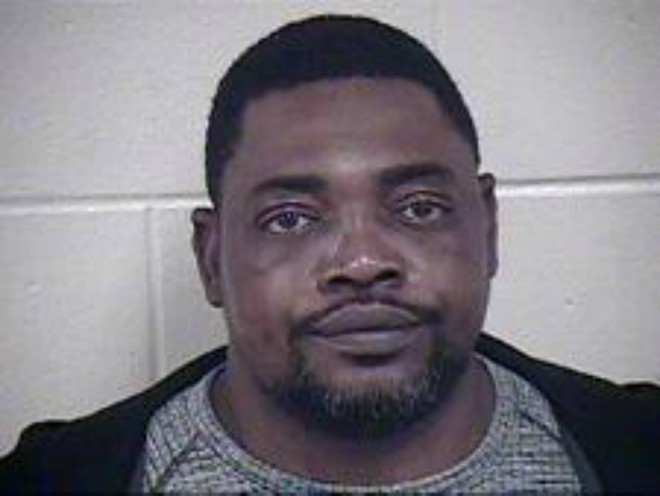 A Missouri con artist scammed lovesick women and men he met on dating sites such as Christian Mingle with stories of sequestered gold, terrible luck and even an imaginary daughter, according to federal authorities.

Kansas City resident Ronayerin Ogolor, 49, was part of what the FBI described as a "romance fraud scheme" that cost his victims nearly $900,000.

A naturalized U.S. citizen from Nigeria, he was arrested on Friday at Kansas City International Airport as he prepared to board a 3 p.m. flight to Germany, authorities say.

Ogolor had lived in Missouri since at least 2013 and has been part of the wire and money laundering conspiracy the entire time, according to an affidavit.

The con took various forms but tended to follow a similar script. Ogolor and his unnamed accomplices are accused of trawling dating sites in search of victims. When someone took the bait, they often would be fooled into thinking they had met a widower who was working as some sort of a contractor — usually an offshore oil driller. The imaginary contractor invariably needed money to get home or pay fees on a pile of cash he promised to then share.

Thirteen victims are described in an FBI agent's affidavit. They live in states across the country, as well as Canada and Europe. Ogolor and his conspirators often picked on the elderly, authorities say. The scammers seemed to particularly like Christian Mingle and Facebook but also used other sites.

In one case, an Indiana woman met a man on Facebook who went by "Lawrence Garrison," supposedly a widower working on an oil rig off the coast of Louisiana. They talked online every day and even on the phone a couple of times. (Garrison spoke English with an accent and claimed he had been born in Denmark.)

In 2015, Garrison sent a picture of a $4 million check and said he would sign it over to the woman if only she would help him out with expenses until he could cash it. He needed money for customs and $500,000 to tow a drill head to Ohio. Later, he needed help paying his twelve-man drilling crew. In total, the woman wired about $450,000 to her needy friend.

About $46,000 was deposited directly into accounts controlled by Ogolor, the FBI says.

Each scam had a different alias and accompanying back story for needing money. There was the guy claiming to be "David Stasiak," another oil rig worker who supposedly had $6 million in gold waiting in Qatar if only he could cover the import tax.

And then there was "Robert Williams," who claimed to have been paid $2.6 million in cash for oil work in Saudi Arabia but needed $1,500 to pay his daughter's boarding school tuition.

They were all scams, according to prosecutors for the U.S. Attorney's Office.

In one case, the conspirators hacked a business and posed as the company's comptroller to persuade another employee to write a $250,000 check to an Arizona man whom the scammers had catfished through an online dating site.

The Arizona man was then supposed to deposit the money and wire portions of it to different accounts, including one that belonged to Ogolor, authorities say.

Federal agents learned on Friday that Ogolor had bought a plane ticket Frankfurt, Germany, the day before and was planning to fly out at 3 p.m., the affidavit says. Instead, agents intercepted him at the airport.

Ogolor has allegedly defrauded his victims of $878,489 since 2013, authorities say. He is facing charges of conspiracy to commit wire fraud.