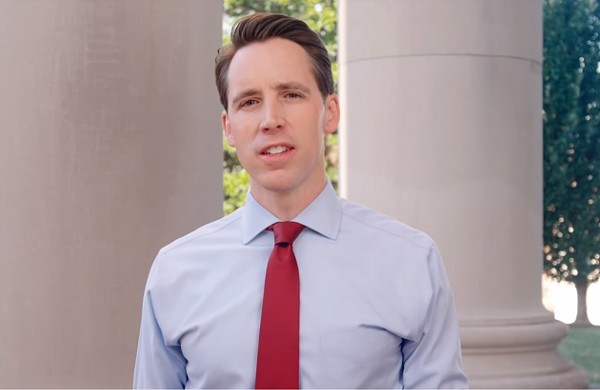 A noxious ad that accuses "white Democrats" of returning to "race verdicts" and lynchings "when a white girl screams rape" has been airing on St. Louis radio in support of Missouri Attorney General Josh Hawley.

In the ad, two black women discuss the recent Kavanaugh hearings and suggest that they could mean big trouble for the men in their lives. Republicans, one woman suggests, know that it's "dangerous to change the presumption of innocence to a presumption of guilt — especially for black men. .... What will happen to our husbands, our fathers, our sons, when a white girl lies on them?"

"Honey, I always told my son, don't be messing around with that," the first woman says. "If you get caught, she will cry rape."

The ad is being paid for by a West Virginia-based political action committee calling itself Black Americans for the President's Agenda. It's reportedly also airing in Kansas City and in Arkansas, where someone captured audio of the local version and uploaded it to Twitter.

You get hear the Arkansas version by clicking on the embedded tweet below:

This is a real radio ad currently running in Arkansas in support of Republican Congressman French Hill on radio stations targeted to the African American community. I don't even have words to describe it. pic.twitter.com/vpzt1nGPlc


In paperwork filed earlier this month with the Federal Communications Commission, or FCC, the political action committee said it was paying for ad buys in the St. Louis market in support of Hawley and "criminal justice reform."

Hawley, who is running against U.S. Senator Claire McCaskill (D-Missouri), has also attempted to make Democrats' treatment of Supreme Court nominee Brett Kavanaugh an issue in the race. The state's attorney general even called for a special counsel to investigate the actions of Senate Democrats.

McCaskill had indicated her opposition to Kavanaugh's nomination even before several women came forward accusing him of sexual misconduct; she ultimately voted "no" on his confirmation.

The FCC records show that Black Americans for the President's Agenda made an $11,560 ad buy at WFUN (95.5 FM), a R&B radio station based in Bethalto, Illinois, that broadcasts to the St. Louis area.

The ad was set to air 80 times from October 1 to October 12, with another 56 spots set to begin earlier this week and run through the election, the records show.

It's not clear at this point what other St. Louis area stations it may be airing on, if any. (Heard it anywhere else? Let us know.) And while we don't have audio of the St. Louis version, several people who have heard it say it's consistent with the Arkansas spot, other than the candidate it discusses.

We reached out to a spokesman for Hawley's campaign to see if he condemns the ad — or has any other thoughts on it. We'll update this post if we hear back.

U.S. Representative French Hill (R-Arkansas), the congressman being supported by the ad in Arkansas, has issued a statement condemning the radio spot. "I condemn this outrageous ad in the strongest terms," Hill said in a statement, according to NBC News. "There’s no place in Arkansas for this nonsense.

Still no word from Josh Hawley's campaign on whether they feel the same way.