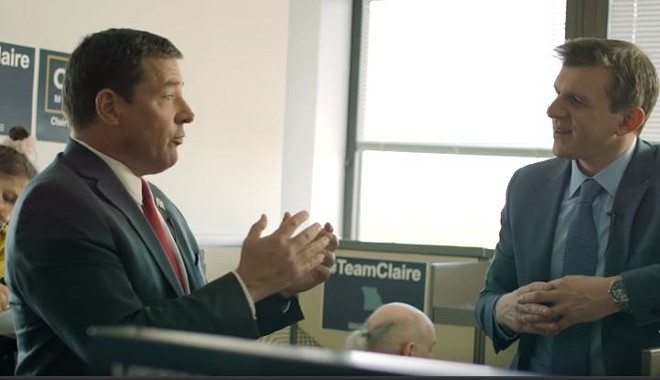 In a bombshell of Totally Journalistic Proportions, James O'Keefe this week revealed that politician Claire McCaskill, a sitting U.S. senator, is actually a Democrat. In Missouri.

That startling conclusion arises from a series of hidden-camera videos released by O'Keefe's Project Veritas Action. It is the latest instance of the self-styled "guerrilla journalist" engineering an undercover sting operation with the purpose of embarrassing liberal politicians ... and not, shall we add, his most compelling work.

In this case, O'Keefe sets his sights on McCaskill, who took office in 2006 and was reelected in 2012 after her opponent Todd Akin said some breathtakingly ignorant stuff about "legitimate rape." Now she's facing Missouri Attorney General Josh Hawley in a race that's too close to call. But O'Keefe calls it like he sees it — or at least, calls it like he wants it to be seen.

Indeed, after watching video's sixteen pulse-pounding minutes, it's clear that O'Keefe has the straight scoop on McCaskill: She's a Democrat trying to win an election in a state in which 56 percent of voters chose Trump. Stop the presses!

The video opens with a shot of the Project Veritas Action logo — a design that includes no less than three different fonts and two instances of an "O" cleverly replaced by a target reticle and a radar screen. Obviously, it is a logo of Great Journalistic Integrity.

And that integrity carries through right into the video's opening minutes, a super-cut of undercover interviews O'Keefe's campaign plant scored with McCaskill and five campaign staffers.

In the videos, which drew prominent play on the Drudge Report Tuesday, McCaskill speaks to an undercover Veritas operative identified in the video only as "Journalist" — and is caught on camera admitting that new gun safety measures could be passed in Congress only "if we elect enough Democrats." She goes on to complain that the Republican Senate leadership won't let other senators bring those measures to a vote.

The "journalist" interjects, asking her about bans on bump stocks and high capacity magazines.

"Of course," McCaskill says, "I've voted for most of those things." Again, stop the presses; who knew she'd admit to her own voting record? (Hawley, God bless him, surely wouldn't.)

About three minutes into the video, O'Keefe himself finally makes an appearance — not undercover, but in a bizarre Extremely Journalistic Setting: a space made to look like McCaskill's campaign headquarters, complete with lawn signs and people posing as staffers in the background, holding phones and writing notes.

O'Keefe then formally introduces the story, claiming the Veritas operative captured McCaskill and her staffers saying things they'd never say publicly, thereby exposing the fact that McCaskill isn't actually an independent or a moderate. Apparently, the big secret is that she's a *gasp* Democrat with left-leaning positions on left-leaning issues.

What follows is a series of unbelievably cringe-y undercover interviews, in which the Veritas plant rattles off long-winded questions to various mid-level staffers about gun control and why McCaskill, for instance, isn't calling for measures to ban "semi-automatic rifles" or campaigning alongside Barack Obama. The questions are framed around the idea that the campaign is knowingly downplaying hot-button issues to maintain McCaskill's chances of winning Missouri's moderate and conservative leaning voters.

In one exchange, the operative asserts to a campaign staffer that a ban on assault rifles should be the first step toward a similar ban on handguns. This leads to the following exchange:


Veritas operative: They give us an inch, and we take a million miles.

Veritas: Because they would do the same to us.

Veritas: You know, it's like, fuck your Second Amendment. People are dying.

Throughout the exchange, the actual campaign staffer, identified in the video as a regional field director named Grace Richardson, answers the questions tersely. At some points her expression seems to indicate that she'd rather be doing literally anything else than talking to this guy.

The other interviews follow a similar pattern, with the Veritas operative repeatedly questioning a staffer on why McCaskill won't publicly take positions that, to anyone with a basic understanding of Missouri politics, would be lunacy.

And even the seemingly juiciest bits, like several staffers joking about impeaching Trump, seem to be undercut by the overwrought Veritas guy trying to ask his questions with all the subtlety of a Bond villain plotting to poison a reservoir.

"So here's the real question," the Veritas operative says to a staffer playing pool in a bar. "Claire holds off on impeachment to get the moderates. What do we tell the moderates when we drop the impeachment hammer afterwards?"

Another staffer walks by, "Get over it." They all laugh.

So. Apparently some McCaskill campaigners are willing to joke about impeaching Trump ... but the segment never even attempts to make the same case as to the candidate herself. In O'Keefe's dark worldview, this apparently proves that McCaskill projecting an image to moderates to get their votes — and small talk between low-level campaigners somehow demonstrates beyond reasonable doubt that she lacks integrity.

It's pretty boring by O'Keefe's standards, which tend to rely more on shock value than new information. He's been shown repeatedly to use selectively edited video clips and misleading framing devices, and his touted successes — he single-handedly destroyed ACORN with similar videos — are overwhelmed by his history of unethical reporting.

For instance, last November, a Veritas agent posing as a rape victim had the tables turned on her by the Washington Post. In 2016, O'Keefe forgot to hang up a phone while pulling a sting on the Open Society Foundation, and he wound up describing the the entire plot for the foundation's voice mail. He even once tried to seduce a CNN reporter with a boat trip on a "palace of pleasure."

Basically, very little about O'Keefe and Veritas comports with what reporters actually do. The McCaskill video ultimately pries a few clumsy and somewhat revealing statements from staffers, but even those moments amount to politically prosaic admissions from people with no real policy pull on the candidate.

Inexplicably, the video also features Ed Martin, the former Missouri GOP Chair who now runs a splinter version of the Eagle Forum and probably nourishes himself on a stolen stash of Phyllis Schlafly's plasma. O'Keefe and Martin have a history: In January, O'Keefe flew to St. Louis to accept an award from Martin for exposing "the dirty playbook of the radical liberal agenda." Now, it's Martin — who was fired earlier this year from a gig as a CNN pundit — who's getting some exposure from O'Keefe.

And not surprisingly, McCaskill's opponent Josh Hawley hasn't let O'Keefe's work go to waste. He's tweeted about the video five times since its release on Monday ... with, naturally, breathless bombast suggesting the Veritas project is on to something big.

.@clairecmc caught on tape proving why she earned an F from the NRA — and then her staff explains they have to keep her REAL views a secret #MOsen https://t.co/RvAOn7FsXY #MOSEN

Reached for comment, McCaskill's campaign declined to answer specific questions about how the Veritas operative infiltrated its staff, but the campaign did take the opportunity to criticize Hawley for boosting O'Keefe's profile.

"It is startling that Josh Hawley would embrace fraudulently embedding somebody in my campaign," McCaskill said in a statement. "He is the Attorney General of Missouri, he's supposed to be going after fraud, not applauding it. I have been very up front about all of my positions. I've never seen something like this in a U.S. Senate race in the state of Missouri."

Again, color us shocked. How dare James O'Keefe attempt to infiltrate a campaign? And how dare Claire McCaskill have the gall to be a Democrat, in Missouri of all places?!? We're going to get to the bottom of this .... just as soon as we build our own fake campaign office.