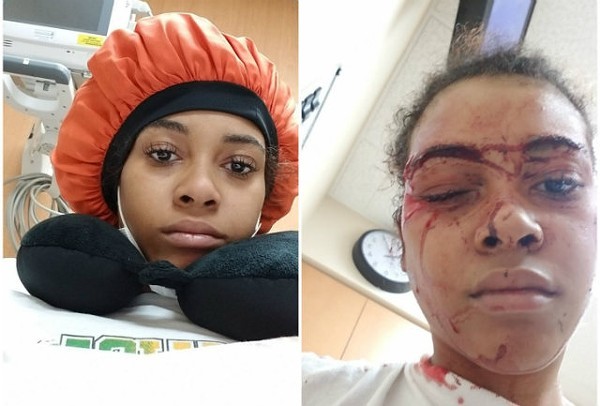 In July, 25-year-old Vanity Allen checked in to SSM Health DePaul Hospital in Bridgeton for stomach pain — only to be left bloodied by one of the hospital's security guards. Now surveillance footage obtained by her lawyer shows the guard grappling with Allen, then tackling her.

You can see a video of the incident below. While the initial interaction takes place just outside the camera's field of vision, Allen has said the guard struck her over her left eye with his fist, sending her falling into the sidewalk.

After that, the video shows the guard grappling with Allen as she staggers, trying to catch her balance. (Watch in the far right corner of the scene.) You can see him dragging her into the hospital, spinning her around and then dropping her to the ground before cuffing her.

Allen's lawyer, Albert Watkins, says the footage confirms what Allen has said: That the guard manhandled a distraught patient who posed no threat. "This was 220 pounds of white daytime TV muscle on top of her," Watkins says. "You have a security guard with an IQ well below room temperature taking it upon himself to see that 'justice' is done to a 90-pound patient in distress."

A resident of north county who had a steady gig doing pre-registration for Washington University, Allen had checked into the hospital that day and already had an IV port installed when she walked outside, seeking fresh air. Overcome with pain, she then sank into a wheelchair outside the entrance, only to be confronted by the security guard.

She has said she put up her hand, trying to get him to back off at a moment she was in severe pain. Instead, she said, he hit her, setting off the interaction shown on video.

Of the security guard, Watkins says, "It is our understanding that he has been relieved of his duties." (A spokeswoman for SSM says the hospital cannot discuss personnel matters.)

Yet it's Allen who has been charged with a crime. SSM Health DePaul Hospital filed a report against Allen with Bridgeton Police, and she continues to face a municipal ordinance violation for assault in the fourth degree.

Still, Watkins says he believes the prosecutor in Bridgeton will be sympathetic to Allen's story. "We have not had the opportunity to fully share the full scope of the injustice sustained by my client," he says.

He says Allen still has a scar from the interaction that will likely be permanent. She's had vision issues and has been suffering from PTSD. She was supposed to start a job in Arizona soon after the incident, but ended up not moving in order to be close to her family and get their support.

"This was a young lady with zero criminal history, admitted for bonafide medical reasons, who had a port installed," he says. "She had the bad fortune to run into Superman in a unitard, coming out of nowhere, who decided it was time to teach this young lady a lesson."

In a statement, the hospital said, "SSM Health DePaul Hospital is committed to providing the best care possible to every patient who comes to us and to ensuring the safety of all patients, employees and visitors. Due to federal patient privacy laws, we are unable to provide details of any patient’s care. The Bridgeton Police Department investigated the matter, and we cooperated fully with their efforts."

A spokesman for the Bridgeton Police Department had previously told the RFT its only role was forwarding the hospital's complaint to prosecutors for the courts to sort out.