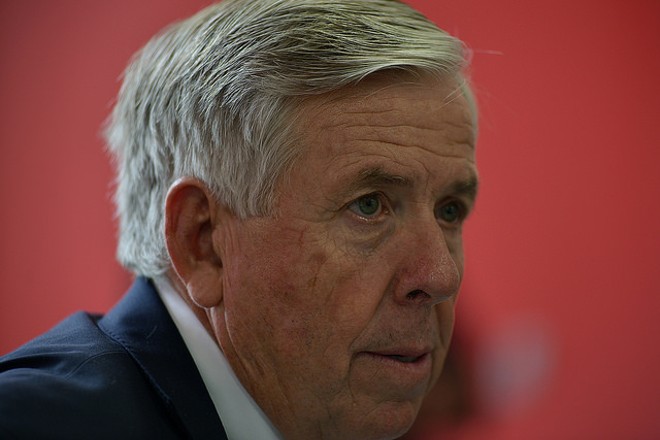 Like many public-policy nonprofits, the Institute for Justice seeks to sway politicians by informing them. That might mean sharing policy papers. It might mean books. It does not, generally, mean the sort of boozy nights out on the house that are all too common in Jefferson City.

No matter. When lobbyists for the Virginia-based libertarian organization sought to distribute its scholarly books to workers in Missouri state government, they were told any such giveaways would violate the state's ban on gifts from lobbyists. And that was a no go.

Now the Institute for Justice is suing. Its lawsuit, filed in federal court Friday, seeks to declare unconstitutional the executive order that stops any employee of Missouri's executive branch from accepting anything of value from a lobbyist.

Despite its libertarian focus, the organization has no interest in arguing that, say, everybody ought to be able to schmooze state employees however they see fit. Says Paul Sherman, a senior attorney at the Institute for Justice, "The only thing we're challenging here is the order limiting our ability to give out documents that we think best communicate our position."

The executive order dates back to the early days of the administration of Governor Eric Greitens (remember that?). Eager to paint himself as a swashbuckling reformer, Greitens issued a broad order banning anyone in his branch of government from accepting anything from any lobbyist — whether it was a non-profit public interest group sharing a position paper or a deep-pocketed utility executive offering box seats.

For the Institute for Justice, that led to problems. Sherman cites the organization's work on behalf of African American hair braiders, who had been forced to follow onerous regulations just to practice their craft. Members of the state board of cosmetology and barber examiners, who'd fought to keep the rules, are executive branch employees. That meant IJ couldn't share materials with them — not even a scholarly publication free to download from its website, but instead provided in a printed format for easy reading. IJ's per-unit cost for having a printed copy made, according to its lawsuit? Just $6 to $10.

Sherman says the organization sought to handle the matter without litigation, seeking an advisory opinion from the Missouri Ethics Commission (and hoping common sense would prevail). Instead, this past January, the commission issued an opinion saying that the books "constitute items of value" and therefore were subject to the order.

A spokeswoman for Governor Mike Parson, who inherited the order from his scandal-plagued predecessor, declined comment, citing pending litigation. However, she noted, "Pursuant to Executive Order 17-02, the Governor and his staff will not accept lobbyist gifts."

IJ thinks that's a mistake — at least carried to the extreme suggested by the ethics commission.

"What's happened in Missouri is part of a broad trend of trying to pass government ethics laws that are as comprehensive as possible," Sherman says. The organization, he notes, is also fighting a similar gift ban in Oklahoma.  "Invariably, they will sweep in things that no reasonable person would believe should be regulated."