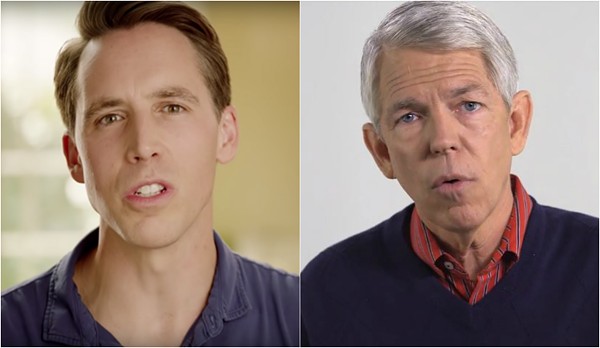 Josh Hawley, Missouri's buffest U.S. Senate candidate and a guy who doesn't know what a truck is, was scheduled to appear in Springfield today for a "Mid-Term Election Update for Evangelicals" featuring a legitimately crazy-pants pastor whose ideas range from putting Bibles in schools to opining about the similarities between homosexuality and Nazis. And no, we're not talking about Mike Pence. (That was yesterday.)

The event has since been cancelled, but the fact that Hawley was even considering making a public appearance with the pastor, David Barton, bears a moment of emphasis.

Barton operates WallBuilders, a Texas-based organization that, according to its website, is "dedicated to presenting America’s forgotten history and heroes," which is a nice way of describing the group's goal of making America Great Again for Christians. Barton has argued that the separation of church and state is "a myth" and spends his time promoting a sort of Christian nationalism that would probably make George Washington throw his fake teeth in rage.

Of course, Barton has ideas about LGBTQ folks. In the past, notes the Kansas City Star, the politically active pastor advanced the baseless claim that mortality and suicide rates prove homosexuality is a health crisis that should be regulated by the government. (Why the good pastor doesn't think the government should instead work to increase quality of life for gay people is a question worth asking.)

Eventually, of course, all arguments lead to Nazis. Which is where Barton went during a radio program in 2017 following a trip to Poland.

The Star quotes from the broadcast:


"The evil that’s there, it still works in the same deceptive means today, it still has that nice smiling face and, you know, a homosexual lifestyle, it’s such a wonderful lifestyle, yeah?” Barton said. “Why don’t you look at the medical stats and see if that’s really true? And so it always disguises itself in different ways, it comes through different means. We see it all the time.”

He went on: “So, what I learned is what I already knew, and that is human nature does not change and if you don’t have the impact of religion to change a heart you will end up like the Nazis.”


Hawley, who was elected as Missouri's Attorney General just two years ago, is currently in a tight race to unseat incumbent U.S. Senator Claire McCaskill (D-Missouri). He has previous connections to the extreme Christian right, including a speech delivered at 2013 event hosted by the Alliance Defending Freedom, whose guidelines bear remarkable similarities to Barton's views, including the claim that homosexuality is a health risk, or, as the ADF more poetically put it, "a way that often leads to death."

Anyway, Hawley's evangelical fans will have to get their Christian extremist nuttery at some other time. According to the Eventbrite page for the event, the "Mid-Term Election Update" was cancelled due to a scheduling conflict.

Maybe?? Or did Hawley instead come to his senses and realize he'd confused David Barton the pastor with the other David Barton? Is it possible the state's AG meant to consort not with the David Barton who spouts fire and historically inaccurate brimstone, but the David Barton who founded a chain of nightclub-styled fitness centers? Seriously now, doesn't that sound more like the Josh Hawley we know?