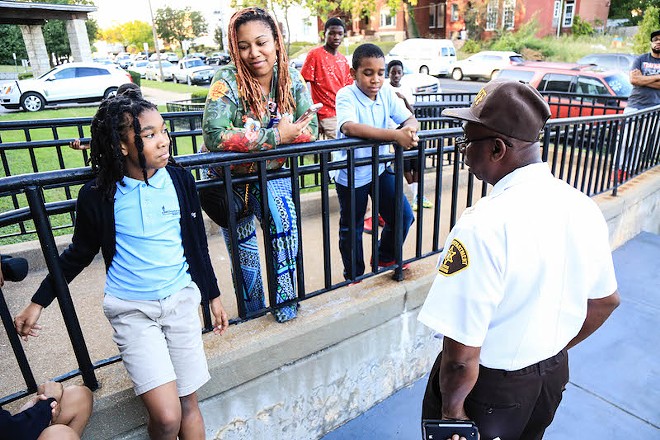 On Tuesday, October 2, as neighborhoods across the country celebrated National Night Out with block parties and barbecues, the gathering on the 4300 block of Delmar in St. Louis’ Vandeventer neighborhood carries special significance. The party, happening on the street known around the world as a symbol of the city’s inequality, is itself part of an ambitious plan to erase the Delmar divide.

Before the night’s fun begins, Vandeventer residents as well as people from the northern part of the Central West End gather in Galilee Missionary Baptist Church to learn about the proposed North Central Special Business District. Mayor Lyda Krewson sits in the front pew next to Police Chief John Hayden.

A pair of residents, Judith Arnold and Eric Kyser, are asking residents to vote to raise their own property taxes, with the funds to be used for beautification and security, to fix sidewalks, to clear vacant lots and fund services not covered by the city. Both Arnold and Kyser live within the proposed district’s boundaries and over the past three years have spent considerable time and energy trying to make it an actuality. Both see it as a way for the prosperity in the heart of the Central West End to make its way north.

“Once this community forms, it will spread to other places,” Arnold says.

Right now almost 20 neighborhoods in St. Louis have at least one special business district. The Central West End currently has seven, but none of them reach north of Olive, and for the most part they shore up prosperity in already well-to-do areas. The proposed North Central Special Business District would extend from Lindell north all the way to Finney, from Vandeventer on the east to Taylor on the west. Straddling the northern end of the (affluent, majority white) Central West End and the southern half of the (less affluent, majority black) Vandeventer, it would be the first special business district, or SBD, in the city to encompass areas both north and south of Delmar.

The phrase "special business district" may sound too steeped in the wonky language of local government to be any match for the near-mythic Delmar Divide. However, it’s important to keep in mind that the divide itself is in part a product of restricted deed covenants, residential security maps and zoning ordinances — government policies and practices that stripped of context can sound wonky and dry, but which have had major impact for north St. Louis.

After Arnold and Kyser finish their pitch, residents leave the church to party outside on Delmar. Food is served. An artist draws caricatures. A Boy Scout color guard troops through. A band plays hits from decades past. Eighteenth Ward Alderman Terry Kennedy mingles with residents on the street.

“This will be the first one like this,” Kennedy says, referring to the SBD crossing Delmar. “It’s a big deal. We have our challenges. Some individuals were skeptical about it, feeling like it wasn’t going to work, that they pay taxes already. But putting it on the ballot ultimately gives the people the opportunity to make that decision.”

Kennedy has introduced a resolution at the Board of Aldermen for the SBD. If it is approved, everyone living within the district's boundaries will vote on the proposal in either the March primary or April general municipal elections, Kennedy says.

If the district is approved, many people living within it will see their property taxes go up less than a $100 a year, based on a tax of 75 cents on every $100 of assessed home value. (Assessed home values are significantly lower than appraised home values. For example, a resident whose home is appraised at $50,000 would only see a tax increase of around $70.) Some residents, particularly those in the Central West End, may see increases nearer $300. The proposal would either sunset or have to be renewed after five years. 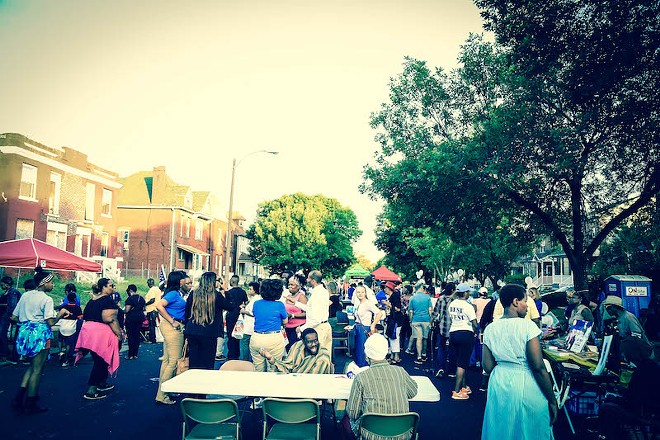 Barry Williams, who listened to Arnold and Kyser’s pitch, is dubious though not completely against the idea. He’s kept an eye on places nearby that have adopted similar measures. “I’ve watched the neighborhood,” he says. “And I haven’t seen anything that has really benefited the people who are here that have been here.”

Another man who asks not to be named says that he’s lived his whole life in the Vandeventer neighborhood, that he has seen initiatives come and go without affecting much change. He says he doesn’t expect this one to be much different.

However, plenty of longtime residents are more optimistic.

William Roth, for instance, is a true believer. The artistic director of St. Louis Actors' Studio also owns the West End Grill and Pub, which donated the food for the block party. He sits on the SBD's planning committee.

In 2005, Roth bought a pair of buildings that were in total disrepair on Boyle about nine blocks south of Delmar. Anything that wasn’t stone or brick had deteriorated and fallen into the buildings’ basements, save for one bathtub that hung precariously from a sliver of an intact second floor. Pigeons had shit everywhere for decades.

But with the help of state and federal tax credits Roth was able to rehab the structures. They now house his restaurant and the Gaslight Theater as well as several other businesses.

As a person who owns multiple large buildings within the proposed district, Roth knows his taxes will go up more than most. But, he says, if the area is going to improve then, “someone has got to buck up.”

Catherine Knights, who is dishing out the food Roth’s restaurant donated, has lived since 1979 on West Bell, four blocks north of Delmar. Her two-story brick house sits in the far northeastern edge of the proposed district. Years ago she moved to Seattle but, even after marrying a man who lives there, found that she couldn’t leave her house in St. Louis behind. She says she mourned the loss when the abandoned husks of houses occupying the two lots adjacent to hers were torn down. She bought both from the city’s Land Reutilization Authority and planted gardens in the new open space.

Knights says that when people ask where she lives, her answer can be a little complicated: “If it’s something positive in the news, then I’m in the Central West End. But if it’s something negative like a shooting or robbery or something really bad, I’m in north St. Louis.”

Knights is herself a big supporter of the proposed North Central SBD. She sits on its board. She tells about a time when her alderman got criticized for installing lighting and beautification near her house where there were no businesses. It highlighted a catch-22, she says. It’s only when an area gets lighting and its vacant lots cleaned up that people start to see a place as a potential business location.

“Delmar is the invisible divide and it shouldn’t be,” she adds. “Nothing should stop there. This city has so much to offer. It could be so much more than it is.”

Editor's note: We updated this post on Thursday, October 11, to include more accurate information about how the tax would affect neighborhood residents if approved. A previous version contained inflated numbers about how the average resident would be affected. We regret the error.